Oct 2010 : It was Thasneems wedding so Sakthi, Vinoth and me decided to goto Kerala to attend the wedding. The wedding was in Palakkad (Palghat) which is popular for Silent Valley which is the main tourist attraction there. We also gathered few details from Thasneem and charted out a plan to visit Nelliyampathy, Dhoni falls and Silent valley.

After closing out on our tasks in office we rushed home to pack our bags. Our bus was in the night from Shantinagar bus stand and we all assembled there by about 9pm.

23rd Oct - We reached Palakkaad early in the morning and started hunting for a good lodge to freshen up. The wedding was on sunday so we had 1 full day to roam around the place. We planned to cover Nelliyampathy and Silent valley on sat, attend the wedding on sunday and from the wedding hall head towards Dhoni falls and then leave to Blore by night. We found a lodge without much difficulty. On enquiring with the localites, we got to know that there was a high probability of Silent valley being closed due to some harthaal. (Harthaal is something very common in Kerala. Like they say, when Saddaam Hussain was killed, Kerala would be probably be the 1st place to declare Harthaal coz Mallus just need a reason to declare a harthaal :D). Disappointed to know about this, we decided to visit only Nelliyampathy falls on day 1. Oct was supposedly one of the best times to visit this place due to the weather. We hired a jeep and left to Nelliyampathi. The route to the view point was a horrifying experience since there was barely any road. We had to go on some mudlands. Sakthi was interested to know how beef tastes like (Beef is more popular in Kerala than Chicken) and so we parcelled some beef fry from a tea stall on the way. Sakth loved the taste of it and in no time finished the whole thing :D. Once we reached the destination we realized that there is nothing much to do here. All we could do is - admire the beauty of nature. We spent quite a lot of time at this spot since we had nothing much to do on returning to our lodge. It was quite pleasing to relax on a grassland high above the madding crowd in a pleasent atmosphere with no worries or thoughts in our minds ! Wish I was a poet or a writer coz the atmosphere was perfect for some literary thoughts. 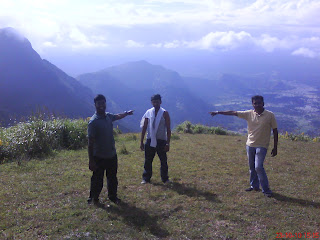 After we were done with our photo shoots and nature admirations, we headed back towards our lodge. On our way back we tried some exclusive kerala dishes like Pazhampori and unniappam since Vinoth and Sakthi were here for the 1st time. We also went out for some shopping since Vinoth wanted to buy a kerala saree for his sister in law as a gift. After all the shopping, we reached our lodge by about 9pm and crashed on bed. 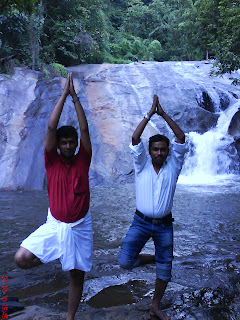 24th Oct : This was my 1st experience in attending a muslim wedding so I had a nice time witnessing it. By about 1pm we were done with the lunch (not to forget Sakthi's embarrassment when he was denied an extra chicken piece during the lunch :D). We then headed towards Dhoni falls which was very near to the wedding hall. We got to know from localites that we had to walk quite a lot to reach the falls. All set for the mini trek we got into an auto and left to Dhoni falls. On reaching there, we started walking towards the falls and we had to walk more than we had assumed ! After an hours effort, we finally reached the falls which had claimed few lives coz of its innocent looks. The pond in front of the falls looked very calm and pleasent but it is supposedly very risky to swim in it coz of the water pressure and the immense deapth underneath. None of us were good swimmers and we also didnt have any spare clothes. And we didnt see any of the tourists getting into the water. So we just spent time sitting on the rocks admiring the beauty around. After spending about an hr, we started our return journey and reached the starting point within no time. We lazily roamed around Palakkaad coz we were done with what we had planned to. By night we boarded the bus and reached Bangalore on monday early morn.