After a lot of planning and change in plans, we finalized on St.Marys island and Ghatikallu. 12 of us had planned to go but 1 had to drop out due to high fever. The replacement was Ahi and hence our team consisted of Vj, Abhith, Manja, Shabnam, Andy, Swetha, Reshma, Prasad, Ahi, Nish, Sandy and me. Our prev trip was to Yana & Gokarna which was a grand success so our moto was to make this a bigger success !! 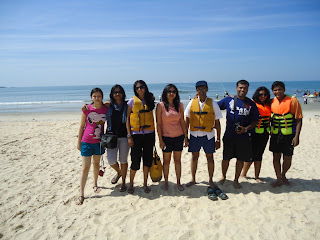 We checked in to Karavali hotel, freshened up, had breakfast and without any further delays left to Malpe beach. Expectations weren't that high coz this was just another beach like OM beach but once we reached there we were all thrilled to know that there's jet skiing in Malpe. All of us did jet skiing and for most of us this was a debut ! Once we were done with this, we left to St.Marys island by a private boat. While nearing the shore, we felt like we werent in India. It looked like some foreign place and to our surprise there was no sand on the shore. It was all coral and white stones !! All of us were provided life jackets during the boat ride. We requested the boatman to give us the lifejackets to swim  in the beach !! 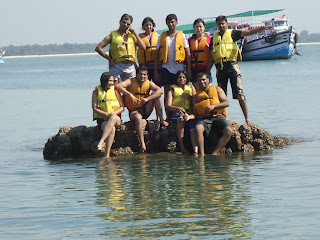 This reminded us of Yuva. All of us were Vivek Oberois and Kareena Kapoors floating in the water with life jackets singing "anjana anjani" :D....Non swimmers had a gala time coz this was a 1st hand experience for many. Though we had plans of exploring the island, we continued floating in the beach throughout coz we felt this different and interesting !! By about 3:30pm we returned to Malpe beach by boat.


We had to leave to Chikmagalur by the 5:30 bus so we rushed to our hotel, freshened up quickly, packed our bags and rush to the bus stand coz the last bus was at 6 ! We travelled by bus and then by a Qualis and finally reached Ghatikallu by midnight .Though it was dark we could figure out that we are amidst extreme greenary and felt that here nature was at its best !! Gals occupied normal rooms and guys had the privilege to stay in a bamboo house ;) 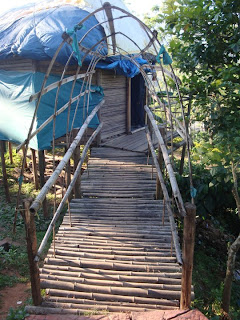 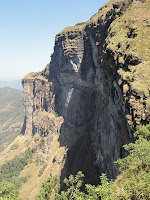 Next morning we woke up all thrilled and excited about the day ahead !! After having our breakfast at the homestay, our guide Sandesh escorted us to the open truck awaiting us and off we left for treking. Thankfully Sandesh was not just a guide but a good photographer too ! At the start of our trek we felt that our destination is far ahead and that we would be exhausted to the core by the time we reach there !! But once we started treking we realized that its not all that tough. We crossed 2 forests and 2 plains to finally reach fort which is at the peak. 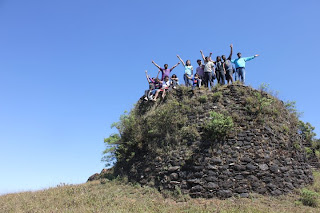 A brief history behind the fort as narrated by Sandesh : When Tippu Sultan attacked that area, the queen at that time ran for rescue and hid in that fort. Later when she was intimated that Tippu had tracked she ran for her life through a tunnel which had an exit as a free fall. When she reached the other end of the tunnel, she had no other go so jumped off and gave her life. 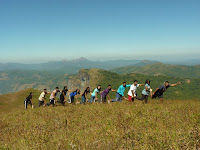 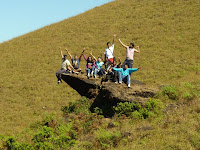 After posing for about n number of clicks we decided that it was time to leave coz we had to cover the waterfall on the same day which was actually part of the 2nd day's agenda (We had to leave early the next day so planned it this way). 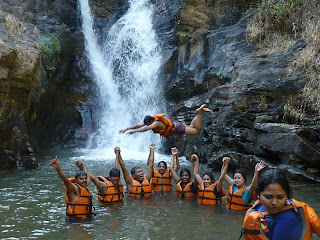 The waterfall was much beyond expectations ! Though it didnt have a great height or force, the uniqueness here was that we were given life jackets to swim across the pond to reach the falls. We even jumped from some point into the pond which was something new for many of them in our group !! Again - non swimmers had a blast coz they could do things that they thought they could never do !
We spent about 2 hrs in the falls and then headed back to our homestay. 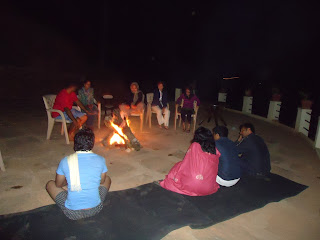 Most of them were dead tired and few fell flat on bed after reaching there. The rest of us played dodgeball which reminded us of how funfilled our childhood was !!
By about 7pm, the camp fire was set and we played dumb charads !! After a lazy but yet entertaining camp fire we had dinner by about 9:30 and returned to our rooms. Though our plan was to sleep and wake up early, we decided not to waste our time sleeping and instead played cards in our bamboo house. Our guide sandesh dropped in between to show us our pics. While watching the pics we were recollecting the fun filled moments that we had during the day !! By about 1am we fell asleep.
The next day we checked out of Ghatikallu after breakfast and left to Mangalore by jeep. 3 of them parted ways coz they had to reach blore the same day...remaining 9 of us headed towards Mangalore airport to bid goodbye to Andy who had to leave to Mumbai. So our gang size reduced to 8. We then headed towards Mangalore to spend the rest of the day in Panambur beach.
Unfortunately Mangalore didnt live upto the expectation ! The beach was overcrowded. Few of us got into the beach and played for sometime. Rest of them flew kites along the beachside. Though the crowd made us upset, the sunset view was a compensation ! We even had some fish fries from the beachside stalls. By about 8pm we left Panambur beach and with this an unforgetable trip came to an end. Im sure the 12 of us are going to cherish this lifelong ...!! 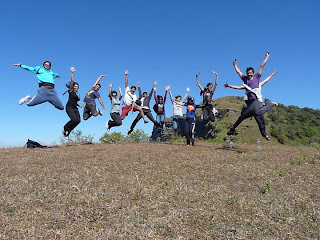