This was the second bike trip with my school buddies Raghu, Akshay and Poly. After our Melukote and Wayanad trip, we wanted to ensure that the next destination should be better than before which was a hard task coz wayanad was a place beyond expectations !! We initially planned for a trip to Gopalswamy betta but Raghu's instincts on helplessness in a remote area on tyre getting punctured made us change the destination to Talakkad and somanathpura which are known for its archaeogical importance. I included Shivanasamudra to the list as it was nearby to these places and i felt it as an insult that i have never been here. Covering all 3 places on a single day was indeed a tough task which we thought was manageable...but it wasnt !!
Though our initial plan was Somanathpura - Talakkadu - Shivanasamudra, we had to change our plan based on our interaction with the localites there. They suggested that the most practical plan would be to cover Shivanasamudra and Talakkad as the route which we took (Kanakapura road) was a longer route to reach Somanathpura first. 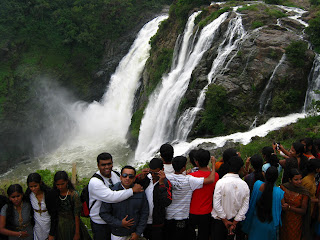 The main falls is known as Barahchukki and this is where we can get into the water. There is a viewpoint called Gaganchukki from where you can get a complete view of Shivanasamudra. Another point called Darga is also visible from here. We started off with Gaganchukki to get an overview of Shivanasamudra. There were few steps that we had to climb down to reach the view point.
There is nothing exceptional about this point. So without wasting any time we moved to the main spot - Barahchukki !!


The localites showed us a shortcut to reach Barahchukki which saved some time though r bikes had a tough time to cut across those underconstruction roads ! Barahchukki was beyond r expectation. An ideal place for waterfall lovers !! The tiny falls seen from Gaganchukki now appeared Gigantic and beatuful. 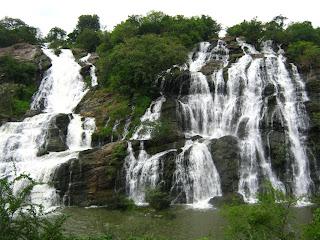 Within no time we were all set to get drenched in Barahchukki. 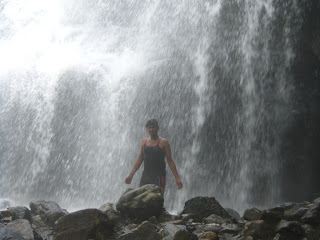 There were coracle rides but they were quite expensive which they claim was due to the water force at that point of time. We had to cross the river to reach the spot beneath the falls. Walking across was an option which looked risky and adventurous. Few of them from r group were game in for adventure and few preferred shelling cash for the coracle. Once we reached the other side we had our own doubts if we should carry on to the next spot as per plan or spend the rest of the day here coz it was superb! After spending a couple of hrs and ciicking a hundred pics, we packed up.
The highlight about Gaganchukki was crossing the river by walking across. At 1 point I felt like "this is probably the end of tonymon" !! :P.
﻿
Our next target was Talakkad. But on our way back we spotted Darga and realized that this was another spot that was viewed from Gaganchukki. So we decided to drop in to this place too. Here we had some effortless trekking. Not that great but the place looked beautiful. 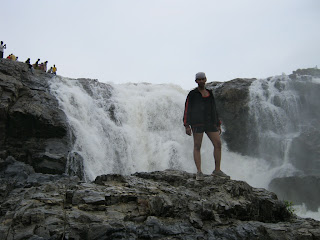 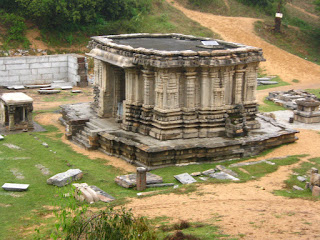 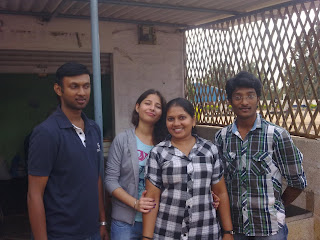 Barahchukki falls : We knew for sure that Barahchukki wont be disappointing since few of us had been there earlier. We started off with the coracle ride. It was peak season, they charged us Rs.150/head. We went close to the falls in 3 coracles and this was a nice experience. Once we were done with the coracle, we crossed the stream to reach the other side where the falls was located. Crossing this was an amazing experience. It wasnt that easy, there was no risk and hence it was exciting. Once we reached the other side, we got into the ice cold water and spent some time under the falls. Among guys, few of us got adventurous and climbed few rocks. Gals were adviced not to climb since the rocks were quite slippery !! Once we were done with Barahchukki we moved on to the next spot - Talakkad.
Most of them who goto Shivanasamudra, make it a point to visit Talakkad also coz they are nearby ! By the time we reached Talakkad, it was a bit late and hence we couldnt enter the temple. We spent time in the beech. Guys went on another coracle ride and by about 7pm we were done for the day. We returned to our TT and reached Bangalore by about 10 pm. During our return journey we played "Telugu vs Hindi" anthakshari. We had a good time during our travel in the TT !!
Posted by tonymon's travel !! at 3:38 AM