New yr bash at Coorg Coffee Flower Estate - A memorable new yr celebration it was !! This trip was a mix of action, romance, comedy, dance, adventure ..in a nut shell a complete entertainer !! It was more like a blockbuster movie with a superb star cast but a disappointing climax :P

The plan started off 1 month in advance and the tickets were booked by 23rd ... 14 of us were all set for the new yr bash not knowing whats awaiting us in Scotland of the East - Coorg.

We started our jounrney on 30th Dec at about 4 pm from BEL circle. Abhith, Mani, Harshitha and me boarded from BEL circle. We picked up Megha from Hebal, Ramya from Bapoosapalya, Prashanth and Sunitha from Marathahalli, Vimal from Belandur and finally Bharath from BTM layout. Johnson, Kiran, Vidya and Jacob came in Jacobs car. We had a good time playing games like Dumb charades and Anthakshari during our journey. We reached Kushalnagar by about 1am and tried contacting the resort guys for directions. Meanwhile few cops stopped by for an enquiry. This gave the initial negative vibe !! They shot lot of questions which created a small tension but then we handled it without facing any issues from them. On receiving directions to the resort, we reached there by about 2am. Though we were initially praying that atleast 50 of them should be there in the resort to create some noise and fun, we were shocked to know that there were more than 300 of them in a place which could accommodate a max of 150 ! Thankfully gals got a room for themselves but guys had a tough time coz we had to stay in a tent which was more like a refugee camp coz there were about 20 of them staying in the same tent !!! We werent even provided blankets (At this point I need to highlight that Prashant slept with his jacket as a pillow in freezing cold weather and realized early morning that he could have put on his jacket and slept instead of shivering the whole night :D ) 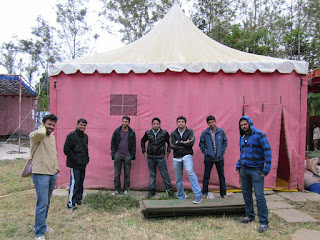 31st Dec 2011 : We woke up at about 7am and had a good laugh at our refugee experience. Breakfast was prepared and all of us were disappointed when we heard that we would be served "upma" but surprisingly it tasted good and we enjoyed the breakfast sitting by the poolside. We then planned to visit chikilihole backwaters which was just 5kms away from the resort. Expectations were quite high but the thrill didnt last long once we reached there coz it was just a normal reservoir with barely anything to do. Abhith, Johnson, Bharat and me started popping stones over the water which is something that we tend to do when we see water ! After spending about an hr at the backwaters, we returned to the resort for lunch by 12:30. 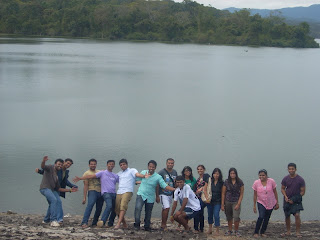 The organizers informed us that lunch would be served only by 2pm so we decided to play some childhood games like lagori. We started of with a warm up session by playing volleyball and then started off with lagori. It was fun to relive our childhood days. Since we had a good team size, it was fun to play. Abihth, Megha, Harshitha, Johnson, Prashant, Mani and me were in 1 group and the rest were in the other group. Our group comfortably defeated them with a score of 3-1 !! :D 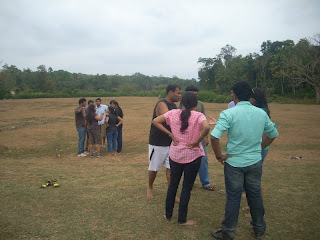 At 2pm we had lunch and then headed towards Dubaare for rafting. Swimming in deep water with life jackets has been a common factor in most of our trips in 2011. Though the place looked quite good, it was a bit disappointing that there were no rapids. We had to do rafting in still water but the interesting part was that there was a spot where we could jump into the water and swim with life jackets. This undoutedly was the best part of the trip. Prashant and Sunitha stayed back since they werent interested in rafting. Rest of us thoroughly enjoyed this part of the trip. 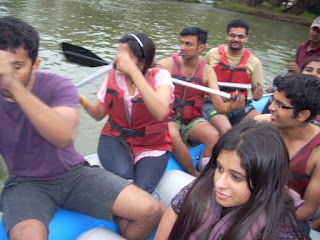 By about 6pm we left from there and reached the resort by about 7pm. All of us barged into the room to get dressed up for the DJ night. Just as we entered the room, the organizer asked us to vacate the room. There were a few unpleasent conversations between our group and the organizer coz the facilities in Coffee flower resort was PATHETIC !! We were finally given an alternate room where we all dressed up quickly and headed towards the dance floor for the DJ night. 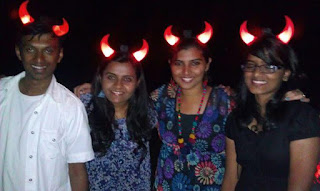 We had a terrific time dancing since we hadnt danced for quite a while. We were finally relieved that there was something good about the resort. But this positive feeling didnt last long coz the power went off by 10pm. We then got to know that there were lot of issues going on outside the dance floor. Localites around the resort cut the power cable, threatened people with knives and even threw bricks on few of them. We were all shocked and scared about what was going around. Cops had also come within no time. The party was now heading towards a disaster. We were just hoping that the dj night picks up at midnight atleast. But to our disappointment, at 12am Jan 1st when whole of India was celebrating, we were sitting in pitch dark wondering what to do. 10 seconds before 12, I started a countdown and Johnson was ready with the party popper. At the count of 1, Johnson bursted a party popper and all those who had gathered around cheered and clapped. We then witnessed some fireworks. After this, we had dinner and noticed that lot of them had gathered around 1 guy. Abhith and me went there to see what had happened. The organizer was getting abused for ruining a new yr celebration for the 350 of them who had gathered there. For a moment I got animated and utilized all the kannada vocabulary that was familiar to me. I felt glad that my 3rd Language in school was kannada coz it turned handy while shouting at that guy. (But Im sure that the rest of the crowd could figure out that kannada was not my 2nd lang for sure coz it was that pathetic :P). The crowd even started manhandling the organizer threatening him to refund the money. By then his supporters arrived to the seen and the organizer managed to disappear from the crowd. We had no clue how and where he disappeared amidst such a big crowd ! A furious mob barged into his house and messed up his furniture ! We even saw few pple running away with his LCD tv and other electronic equipments !! We reazlied that it wasnt safe to stay there any longer and hence left from there by about 1:30 am. On our way, a white color maruthi van blocked us and few guys got out of the van. All of us sitting inside were horrified wondering whats going on. Everyone was speechless !! But in a few moments we realized that they were not blocking our way and instead were trying to cut across the road. There was a big sigh of relief :D. We reached Mysore by about 3:30am and our plan was to halt at Mysore.
Once we reached Mysore few of them had the opinion of returning to Blore and few decided to stay back. Johnson, Kiran, Vidya and Jacob stayed back, the rest of us headed towards Maddur CCD.

Jan 1st 2012 - Johnson and gang spent jan 1st in Mysore at Planetx. The rest of us spent time till about 9am in Maddur CCD . We played the game Truth or Truth (a simpler version of truth or dare coz we didnt have the energy to take up dares :P ). We had lot of fun listening to Prashants stone theory and got to know lot of dark secrets in each others lives of which Prashants casanovic experiences were the highlight !! Abhith pledged that on jan 2013 he would take Prashants place :D ... In memory of the gyan that we received from the love guru, we named Jan 1st as the Stoners day :D The stoneman murders was an icing in compensation for the disappointing new yr celebration that we experienced in Coffee flower resort ! 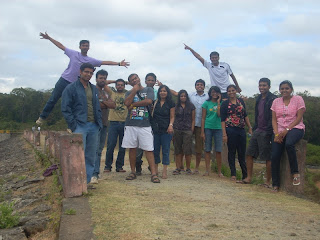 Morals of the story :
a. Never book a dj night without prior track records - It could ruin your new Yr !!
b. Never drop by COFFEE FLOWER RESORT coz they provide the worst ever facilities that you could think off
c. Tony mon still remembers Kannada to a certain extent :D
d. Group with which you travel matters a lot (We had some amount of fun only coz the group was good !!)
e. Playing childhood games once in a while is very entertaining and helps relive childhood days !!
f. Stone theory is something that one should be aware of before you start flirting :P (As stated by the Love guru aka stoneman Prashanth )