Mysore trip on a cycle !

Couple of yrs back Abhith had cycled from Chennai to Bangalore and since then many of us developed a craze towards cycling. I was the last to buy and I am a proud owner of a Schwinn Searcher Sport !!
We planned a cycle trip from Bangalore to Chennai and a group was formed in no time. Abhith, Vj, Bharat, Naveen, Johnson and me. Johnson had to hire a cycle and the rest of us had our own cycles. Considering the climatic conditions we decided that Chennai would be too tough so we changed our destination to Ooty. Since Ooty had lot of up hill cycling we felt it would be highly impractical to reach there considering that few of us were first timers. So we finalized on Wayanad and off we left on Nov 12th early morning. The starting point was my place. Abhith and Vj stayed over at my place the prev night. Johnson and Naveen reached home at 5 in the morning. Bharat planned to join us from Mysore road since that was nearer for him. 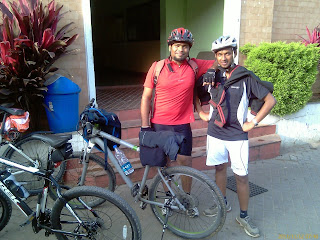 All set for a cyclothon, we left at 5:30am. Our 1st pitstop was at kadumane which was 35 kms from my place. We had our breakfast there. All of us were as fresh as we were when we started. None of us felt tired covering 35 kms which built up our spirits. We filled our tummies with iddly, vada and dosa. We ate just enough to fill our tummies coz cycling with a heavy stomach would be tough. 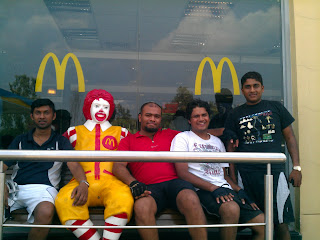 We took our next break after cycling for another 20kms. Our legs were still intact and we were still energetic. Surprisingly Johnson managed to cycle comfortably though this was his 1st cycle trip. The next pitstop was after another 20kms. By now we had covered 75kms and our legs had started to ache a bit. At this point we had halted at McD. More than our legs, our butts ached and this literally was a 'pain in the ass' :D. But we were still optimistic of cycling to wayanad. The next stretch was a tiring one coz it was getting hotter and we cycled continuously for another 25kms. So our 4th stop was when we covered 100kms ! At this point we were quite exhausted. 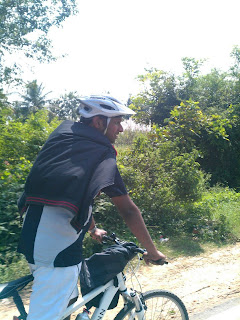 It was time for lunch. We ate quite a lot since we spent lot of energy cycling in the hot sun ! The lunch break was quite a long one. After a long break we continued our journey. The next 20kms was hectic ! It was uphil most of the time. To make it worse, our stomachs were full. We realized that at this rate Wayanad would not be possible since we had to returm to Bangalore the next day. With great difficulty we covered the next 20kms. Abhith, Vj, Bharat and Naveen had gone much ahead of me and Johnson was far behind. I was cycling all alone and my source of inspiration was the tachometer ! Every now and then I used to check my meter and encourage myself that i have 2/3rd of the distance and there is just some more to go. After crossing about 115kms i gave up seeing the big uphill road ahead of me. I decided that its time i get off my seat and started walking for a while. I went pushing my cycle for a few kms and finally spotted few cycles parked on the roadside. When I went closer I realized that Abhith, Vj, Bharat and Naveen were resting under a tree completely exhausted. I was glad that I was not the only one to crash :D. We halted there till about 5pm since we found it very difficult to cycle. The 20kms after lunch was a horrifying experience. 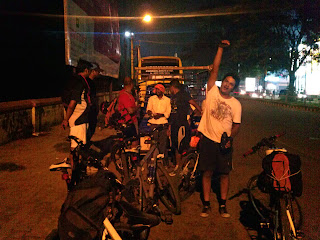 At about 5pm we made up our mind that our next stop would be in Mysore! I couldnt sit and ride coz my back was hurting. So I stood and rode the next 20kms !! Thankfully the next 20kms was a downhill. Without much difficulty we covered the next 20kms and reached the Mysore border. As soon as we saw the board "Welcome to Mysore" we stopped for a break before we reach Mysore city. Johnson was far behind so we had to wait for a while. Since he didnt turn up for quite a long time, I called him on his mobile to know that his cycle had brokedown. The brakes were jammed and he couldnt cycle further. He also lost his jacket and some cash that he kept in his jackets pocket. So we asked him to get into a goods auto and cover the next 10 kms. We waited for Johnson to reach the Mysore border. By then all of us decided to goto Mysore city in the goods auto. Our revised destination was Mysore and now that we have crossed Mysore border, cycling for another 10kms wouldnt add to the credits :D. So all of us got into the goods auto in which Johnson had come and reached Mysore city by about 7pm. We stayed in Comfort Inn and had a sound sleep. The next days plan was still a big question mark considering that Johnsons cycle wasnt in good condition and it would be a prob if we are stuck in Bandipur forest. 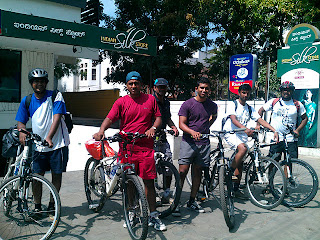 The next morn we woke up and were surprised coz our legs werent hurting !! The prev night we had slept fearing what would be the state of our leg after cycling this long. We decided that it would be better to spend the day travelling around Mysore and return to Bangalore by the evening bus. (We had to stick to volvos cos we had to dump our cycles in the luggage carrier.) 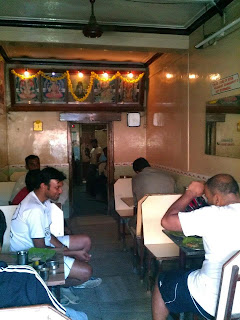 We checked out from the lodge by 12 and headed towards Planetx where we did carting and bowling. We also had masala dosa's from Mylari hotel. Mylari is supposedly one of the oldest hotels in Mysore and they have a very unique style of preparing dosas. Do make sure that you drop in at Mylari hotel for some tasty food  when you visit Mysore (It is close to the mysore zoo).

From here we headed towards Mysore bus stand, boarded the 6pm bus and reached Majestic by 9pm. Majestic was 10kms from my home. After cycling for 150kms, 10kms was like a piece of cake !!
Posted by tonymon's travel !! at 8:50 AM