25th Sep 2010 : I had been to Nandini hotel on St.Marks road with few of my college friends. On our way, Vj showed us this house and explained the story behind this house. Here goes the story : There were 2 sisters who lived in this house. They were spinsters and the younger one ?(Vera Vaaz) was an advocate. On an unlucky day in 2001, Doice Vaaz was killed when Vera was not in town. The scary part is that she was killed and burried in that house itself..!! Vera was later asked to vacate from the house. Since then this house is left abandoned and was declared haunted by the public. 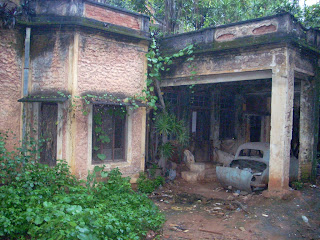 From the day I heard this story I was curious to enter this haunted house. I did a bit of research in net and was shocked to read a few scary incidents. I then made up my mind that I would visit this house the following week. After convincing few of my friends, we finally visited the house on Gandhi jayanti (Oct 2nd). Our team consisted of Raghu, Johnson, Basil, Sanal, Shiju, Titus and me. We were looking for the piano and the headless statue that was mentioned in few of the blogs. 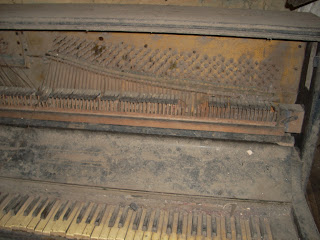 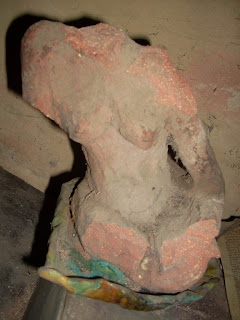 The outside view of the house did give a negative feeling (probably coz of the stories that we had heard). There was a broken window through which we entered.It was pitch dark inside. Glad that we had a couple of mobile torches !! The house was completely ruined inside. The sofa sets, dining table, glasses, bottles, showcase etc were all there but in a messed up state ! We spotted the Grand piano in the living room. But it was a treasure hunt to spot the headless statue. We started investigating the house. We found her spectacles, sandals, utensils, magazines, gramaphone disc etc etc. Finally we found the so called headless statue. It was barely 15cms !! 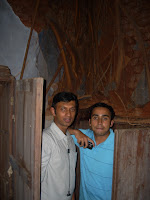 There were lots of rooms and each room led to another room. Only thing that gave a haunted look was that there were roots of trees creeping through the walls of a room..!

I guess the Vaz sisters were obsessed with glasses. There were glasses all over the house and the strange thing is that noones dared to flick them since 10 yrs ..!!  We even found some court papers inside the car (They probably belonged to Adv.Vera). 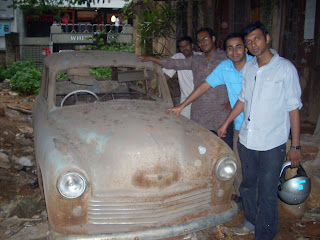 After about an hour of investigation we came to a conclusion that the stories about this house being haunted is all bogus and imaginary. There was no cross that made loud sounds and none of us burnt our backs. The so called headless statue brought a smile on our face and not a shiver. We just picturized the house 10 yrs back and unknowingly cursed all those who were responsible for this house to be tagged as haunted !!

Final verdict : This house is haunted because people claim that its haunted and not because its actually haunted !!! Sad that there's no-one to claim for this house. This sure is an abandoned beauty.