This has been the best unplanned trip till date !! Since a week we had been planning for a trip but the venue kept changing every now and then. Finally Johnson came up with the Kodachadri plan on 26th evening. But many of them kept dropping in and out of the plan. At about 7pm on 26th it was decided that we would be going to Gopalswamy betta by bike. At about 8pm there was a conference call between johnson, reji, alex and me. Our final decision was Kodachadri and we decided to go by a Qualis. Reji arranged for a Qualis and the plan was to pick up Alex from his flat. At 10:30, the driver gets a shock that we had a 2 day plan in mind :D ...he disagreed and we were wondering how to go !! The next immediate plan was to go by train but prob was that Alex would have to board the train from Majestic as that was closest for him and he had to travel from Ejipura to Majestic in 25 minutes !! With great difficulty in filmy ishtyle Alex reached in time and got into the train and we boarded the same train from Ypur. We jumped into the Sleeper coach though we had a general ticket. As expected TT and cop caught us and warned us that we may have to pay a penality of 300 per head for traveling in a sleeper coach with a general ticket. Reji used his flattering and buttering skills to resolve this issue. The TT finally arranged for AC tickets !! (charged us Rs.70 extra but thats fine coz we got to travel comfortable !! ) 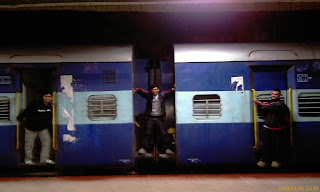 We reached Shimoga by 6am the next day (27th Nov). From there we had to reach Simha farms which was rated the best as per my rough google search. After boarding into the bus we realized that there are no rooms available in Simha farms which was a big disappointment for us. The co passengers in the bus suggested that the best option for us would be to stay in Kollur as that was the nearest to Kodachadri. We went by the majorties opinion. The bus took 5 hrs to reach Kollur which was just 130 kms from Shimoga !!! As expected Kollur was a very religious place. We found lots of newly married couples roaming around Kollur in their Kerala attire !! To our disappointment the lodge that we found there wasnt as per what we dreamt about Simha farms but the low tariff rates balanced our disappointment :D. After a pathetic lunch we asked the lodge owner to arrange for a jeep to take us to kodachadri which was 30 kms away from Kollur. 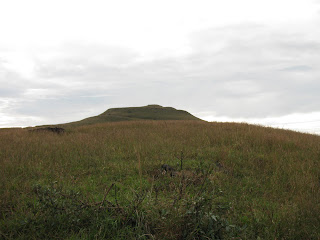 Our mantra for the day while visiting Kodachadri was "MIST is a MUST". But unfortunately there wasnt any mist when we reached there. Without any delay we started our trek after promising the driver that we would return by 6:30pm. We kept walking amidst the scenic beauty. 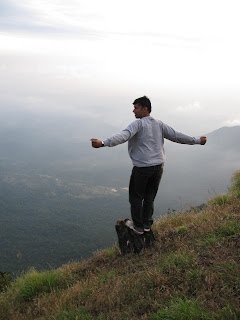 There was a regular trekking path so wasn't hard to figure out the way. Finally we reached the spot where Shankracharya used to meditate. Like all other hills there was just a temple on top but the view was awesome. 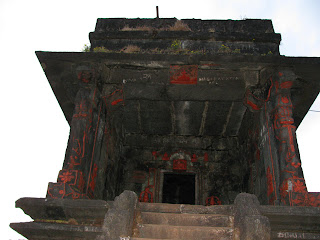 Mist would have made it look better but nevertheless it matched our expectation. Some college students had come to camp on the hilltop. We too had plans of staying back till sunrise but considering the jeep driver we started our return trek after sunset coz it was getting darker minute by minute !! 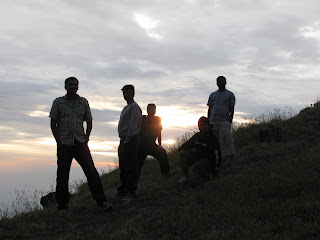 By the time we reached the parking lot it was pitch dark. On returning to our room we played cards for about an hr and all of us fell asleep.
Next day morning (28th Nov) we woke up wondering whats in store for the day coz we had no clue where to go. After our discussion with the lodge owner we were left with 2 options - Jog falls and Murudeshwara. We finally settled with jog falls. The lodge owner arranged for a Xylo. 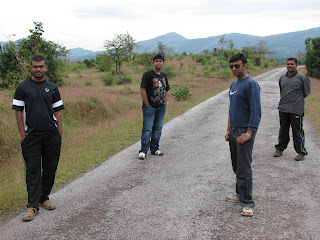 We started our day 2 journey by visiting Mookambika temple. All of us were excited to see the Elephant blessing those who gave a rupee as an offering. We too received blessings and then off we left to Jog falls !! 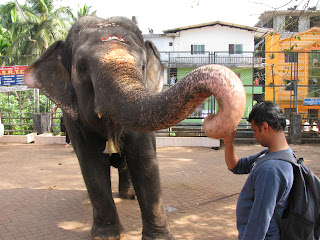 Jog is nearly 70kms from Kollur and it took us 2 hrs to reach there. But once we reached there we weren't that convinced coz Jog didn't appear as dynamic as we had visualized. The very thought of climbing 1400 steps brought down our spirits. But after climbing down we were back to form coz we had ample time to play in the water. None of us were swimming experts so didn't test our swimming skills much. The place was such that my Vrikshasan pose was obvious :D ... 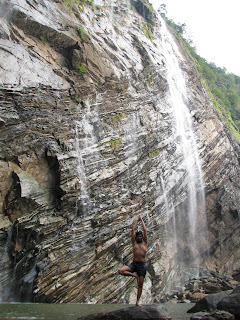 For nearly an hr we played in the water and then decided to leave Jog coz we had planned our return journey by bus from Shimoga.Climbing 1400 steps was a BIG TASK !! Reached the bus stop just in time, boarded the 6:45 bus and reached Shimoga by 10, got into the 11pm bus to Blore and reached Blore by 6am. We were dead tired after our 2 days of unplanned trip and the 5 of us felt that this has been the best of this sort till date !! 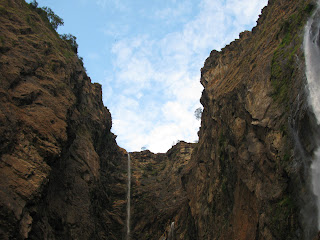