This was one of my 1st experiences in trekking and it is till date the longest one ! Tadiyandamol is a place that is popular among trekkers and less known to others. It is located in Coorg district and is the 2nd longest trek in Karnataka. Never had I heard about this place until the day before the trip. It was a group of 12 which was a mix of my 12th std batch (Abhi, Venu, Chetan and me), our juniors and few of our seniors.
We started our journey from Bangalore on 30th Jan night and reached Virajpet early morn. Coorg being the Scotland of East, was colder than what we had assumed. We were freezing !! We freshend up in a lodge, packed food that we would need till the next day and started our trek. (We couldn't load our bags much coz we had to trek for about 10kms !!) 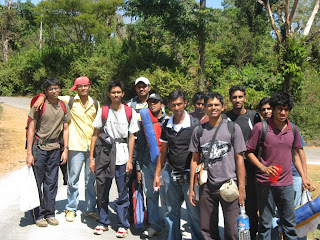 Our 1st destination was Nalaknaad aramane. A very ancient palace that was no bigger than many of the houses I have seen in my hometown. The interiors have still been preserved like it was ages ago. Few yrs before our visit to this place, a movie was shot here which caused some damages to the art work that was done on the walls after which shooting was banned here. There was a room inside the palace which was pitch dark. Supposedly this was the room that the King used when he was attacked by Britishers and other invaders. Once you enter this room, there is no light and you wouldnt be able to spot anything. From the other end of this room, there is a secret tunnel which leads to some safe spot far from the palace. We couldnt afford to spend much time here since we had to reach the peak before it got dark. 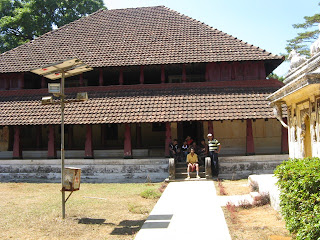 So we started trekking towards the peak of Tadiyandamol. Though it was too cold early morn, by lunch it was burning hot and we had a tough time trekking. To make it worse, we had to carry our tents in shifts. There were 12 of us and 3 tents. 2 of them were required to carry 1 tent. So we kept taking turns to carry the tents which was additional to our backpacks and food !! 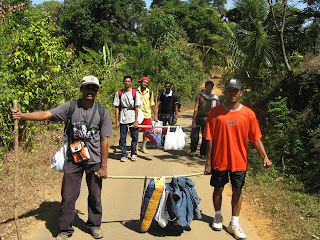 Each time we reach a mini peak we encouraged ourselves that we are almost there. But we realized later that we had encouraged ourselves quite a lot of times (there were lot of mini peaks on r way !!). Finally by early morning we reached the final destination - we were on top of tadiyandamol high above the clouds !! We were lucky to view the sunset from above the clouds !! It was about 6pm when we reached there and all of us were dead tired. We could afford to lose time and started preparing our tents. Within an hr all 3 tents were set and we made ourselves comfortable inside. 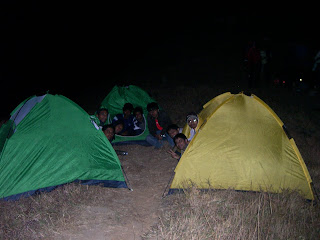 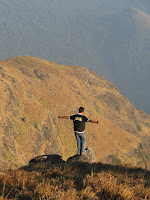 Another group had reached there before we reached and they had set a camp fire too. We slept quite early coz we were tired. Though the tent size was for 3 of them, we had no option - we slept 4 in a tent !! By early morning 4 of us were freezing inside the tent. We kept wondering what went wrong. After we woke up we realized that our tent was torn and Venu's leg was outside the tent :P. Sunrise from above the clouds was beyond thoughts !! We started our return trek after some photoshoot. During our return trek we planned to visit a waterfall too. 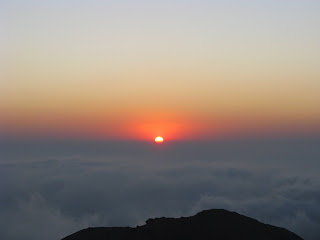 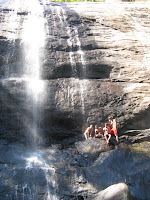 The waterfall was a small one but the water was extremely. We were shivering when we stepped in the water. All of us played in the water and even climbed to a spot below the waterfalls !! The swimming experts went swimming in the ice cold water. We couldnt afford to spend much time here as we had no food left for the day. Hence, we returned to Virajpet and reached Bangalore late in the night. This sure was the best trek I have ever had !! Thanks to Abhi for inviting me to this trip !!
Posted by tonymon's travel !! at 7:33 AM