Ooty was always on my wish list and I had a picturization of Ooty as a place covered with mist and fog. But I never got a chance to go there coz most of my friends had been to Ooty sometime or the other.
Kiran had come down from US and was supposed to visit his hometown - Ooty. He felt that it would be a good idea if I would also go along. So off we left to ooty by Rajahamsa on a saturday night !

After a good sleep i woke up early and realized that our bus had almost reached Ooty. I was all thrilled coz i had seen Ooty in many movies and always wanted to be there. There were several picturizations in my mind about this much hyped place.

We freshened up at Kirans family friends place and started our day 1 visiting the popular spots in Ooty. We visited the Doddabetta, Botanical garden, Toda huts and the lake.

Doddabetta : Its a very popular tourist spot in Ooty, at a very high altitude. All it has is a viewpoint but yet its crowded. Its similar to Nandi hills in Blore. Neither is there anything spectacular about this place nor is it disappointing. After clicking a few pics here, we moved on to the next spot.

Botanical Garden : This was just another park like the Lalbhag in Bangalore. Nothing different about this. A good place to relax after a heavy lunch. The flower garden didnt interest me much but Kiran had a good time with his camera !

Toda huts : This looked very historical and interesting. Toda's were a group of people who had inhabitied this place ages ago. The huts that they stayed are still there and that forms the attraction in this place. 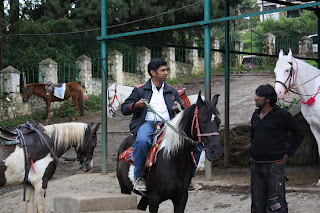 Ooty Lake : Those who visit Ooty wouldnt miss out on 2 things though both are ancient and kiddish presently - Boating and the steam engine ride. Ooty lake looks very similar to the lakes in wayanad, kodai and yercaud. More than the boating, it was the horse ride that thrilled me.  We also visited the artificial botanical garden next to the lake. There was a small mela which we just rushed through. Kiran and me went horse riding along the lake and we also travelled in the steam engine which was the end of our day 1's schedule. We then travelled to Coonor.

By night we reached Cunnoor and stayed at Kirans cousins place. The next day was scheduled for comparatively more adventurous spots ! We hired a jeep and started our journey. 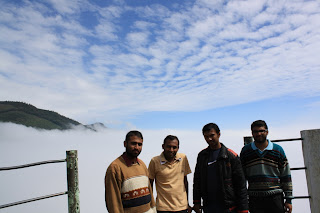 Dolphin nose : The next spot was the dolphin nose. There is a similar spot in Kodai with the same name. It is named as dolphin nose since there is a rock which resembles the dolphins nose and tourists usually stand at the tip of this rock to pose for pics. Safety is a bit better in ooty compared to kodai since there was a guard to control the crowd. 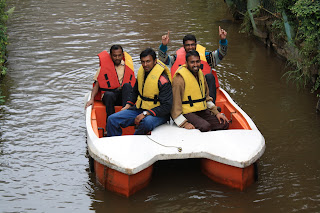 SIMS Park : Since I didnt find the Botanical garden that interesting, i wasnt that interested in visiting another park. But since Kiran said that he spent half of his childhood days in this park, i thought of having a look at it. It didnt disappoint me 1 bit and I realized why Kiran spent his childhood days here. The scenic beauty was awesome and the boating in this park was the best compared to Kodai, Yercaud and Wayanad. Not sure why they gave us life jackets but it was a very pleasant experience boating in this park.

Coffee plantations : The coffee plantations reminded me of munnar. We went inside the plant and a guide explained about how coffee powders are prepared and sold in packets !! This was just an informative session after which we returned home, packed our bags and returned to Blore.

A place that you shouldnt miss out while planning an Ooty trip is Coonoor !