Since 2 yrs I had been planning a trip to wayanad with many groups. But it always flopped somehow or the other. Finally materialized with my IISc gang on sep 17th. 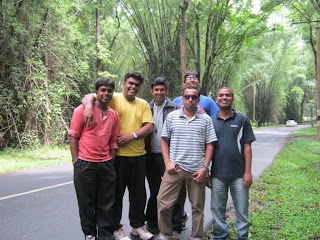 sept 17th : Raghu stayed over at my place the prev night and we woke up at 4:30am to get started with our trip. Gopi was ready at 4:30 itself and started walking from Nagaland circle to mathikere coz he had no other work. By about 5:15 gopi, akshay and poly gathered at my place and we left to soma's place to pick him. The route was Bangalore - mysore - Gundlupet - bandipur - wayanad. We reached Mysore by about 8 and Crossed Blore border by about 11.


We checked into a lodge called Doha and then headed towards Meenumutti falls. Our plan was to cover Meenumutti and sujipara falls on day 1 & Chembara peak and Edakkal caves on day 2. 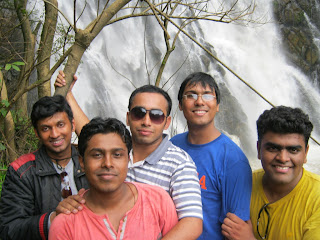 Meenumutti falls was hard to trek. We had to strain ourselves depending on ropes tied here and there to help us in treking. The trek was tough and the guides irritating words made it tougher. He kept blowing his trumpet that he could trek Meenumutti in 20 mins ! Even towards the end of trek wen I asked him how much more to trek he repled "For me it'll take 5 more mins but for u all it would be 20 mins" We felt like throwing him into the falls. Trek was awesome but the disappointing part was that we werent allowed to get into the water. The ideal time to visit Meenumutti falls is Nov-Dec coz only during this time we are allowed to get into the water. 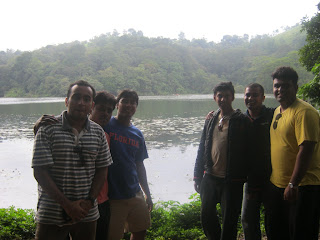 We finished Meenumutti trek by 3 and then went to some toddy shop to have lunch. We had some toddy also to refresh ourselves ! From our interaction with the localites we realized that Sujipara would be boring after treking Meenumutti so we headed towards Pookot lake. We had to rush coz the closing time was 5. We reached pookot lake by 5 and just wen we reached Boating time was over. We found many school kids here. We wondered whats so special about Pookot Lake !! We couldnt play in the water and there was just boating for which we were late :D 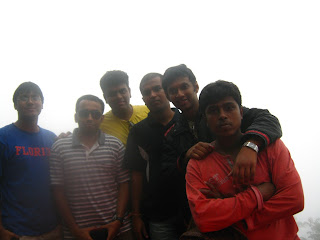 So we clicked few pics here and then headed towards some viewpoint near wayanad border. But our bad luck was so good that the entire area was filled with fog. We could barely see each other so let alone viewing Wayanad from there ..!! :D We clicked a pic there just for records (the background was pure white and the pic looks like a studio pic :P )

By about 8 we returned to our lodge and bought some food parcel on our way. Dinner was sponsored by RD and Soma. We slept by 11 coz we had to wake up early next morning for the trek to Edakkal caves. 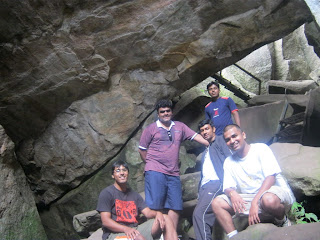 Sept 18th : Our plan was to vacate the lodge and head towards Edakkal by 7:30 . But RD had to spend time in the bathroom from 6 to 7 which delayed our plans :D We kept pulling RD's legs throughout the day for this :D By about 8 we left our lodge and reached Edakkal by 8:30. This place looked beautiful and we had a spledid time treking up the caves. There were jeeps available to take us to the caves but we chose to walk the distance. We had a good laugh at Soma's style of treking coz he wasnt comfortable treking. We reached the caves by about 9:30 and spent some time there. 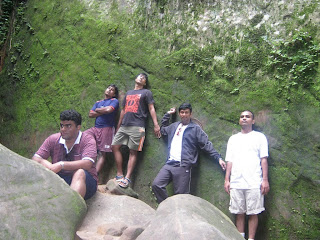 The guide told us about the history of edakkal caves. There were some carving on the walls of the caves which was done by inhabitants 4000yrs ago.We expected some intellectual mindblowing message oriented carvings. But to our surprise inhabitants 4000 yrs ago had carved pictures of a man, elephant and sun :D By about 10:30 we reached the parking lot. 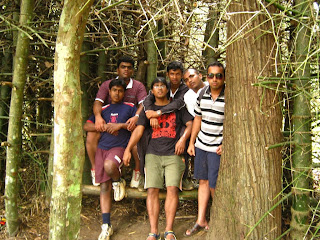 Our next destination was Kuruva Dweep coz we were told that its too late to goto Chembra peak. Chembra peak was a half day trek and we had to leave by 4 so we changed our destination from Chembara to Kuruva. Kuruva was about 40kms from Edakkal. The road was blocked when we were just 3 kms away from Kuruva. So we had to park the car there and walk for 3 kms through some forest. After a long walk we reached the spot. We had to cross the river on a raft after which we had to walk for a km to reach the island. 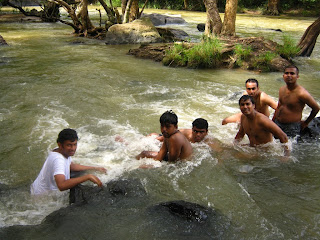 We played in the water for about half an hr and by about 3 we decided to walk back. It started drizzling while walking back but thankfully the drizzle didnt last long. We reached the car by about 4:30 and started heading back to Bangalore. At about 5:45 we realized that the checkpost at Wayanad border closes by 6. So we had to rush to avoid staying back in wayanad. Poly's drving skills saved the day for us ! While crossing the Bandipur forest we got to see some wild bull too !


We finally reached Blore by midnight. Poly gopi and RD stayed over at my place and left home the next day morning. This sure was a trip to remember considering that I had been waiting for this since 2 yrs ..!! :) 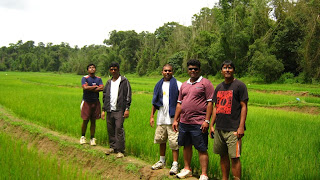