My 1st overnight trip with my coll gang ! This was during our semester break after 7th sem. 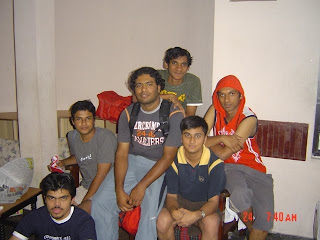 22nd Jan 2008 : All of us gathered in Majestic to board the Rajahamsa to Pondicherry.We reached pondy on 23rd morning and went searching for some lodges. We finally found one lodge could accommodate all 7 in 1 room. We freshened up as early as possible to kick start our pondy tour :) Our plan was to cover Church, temple,  Pondy beach, Aurobindo Ashram and French colony on day 1. Auroville Beach, Matrimandir, park, Nehru street was the agenda for day 2 !Our mode of transport were Atlas cycles (We rented them). 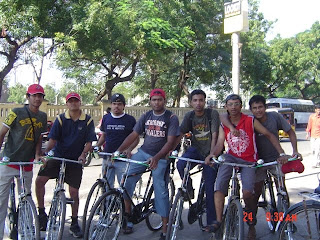 We first visited some famous church and temple in Pondy. Our next destination was the french colony which we had seen in many movies. There is hell lot of difference between the pondy town and French colony though they lie adjacent to each other. French colony is extremely clean and the roads are all cemented. The entire colony is calm and peaceful. This is very close to the pondy beach. Aurobindo ashram is inside the French colony so visited that too. A very divine place where you couldnt stop yourself from staying quiet !!
We even visited some museum close to the ashram. 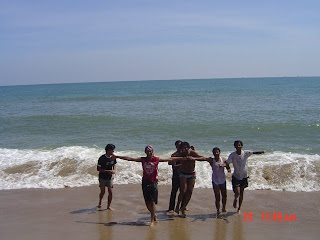 We then headed towards the Pondy beach. But getting into the water is prohibited here so we tried looking for a spot where we can get into the water. Vijay spotted some lonely beach and it appeared quite nearby. So we started cycling towards that direction. But no matter how much we cycled the beach still appeared far away. We cycled for nearly 10-15 kms reached the beach that Vijay had spotted. After reaching there we realized that it was Auroville Beach which was our schedule for day 2 :D.. This beach was very clean and we spent some time playing in the water. 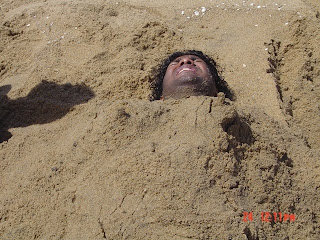 We even burried Abhith in the sand. :D After about an hr we left from there coz we had to get back to pondy by eve. After returning to Pondy we had dinner and roamed around Nehru street. We then went to Pondy beach and sat on those rocks till midnight. It was great fun to sit on those rocks and look at the waves during the night time ! 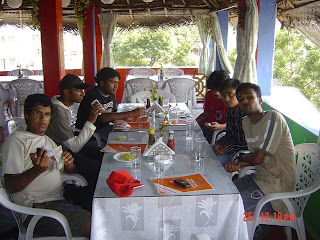 24th Jan : We vacated our rooms and headed towards Matrimandir. The cycling experience was a memorable one. But on our way to Matrimandir we got scammed at some restaurant. We ordered lime juice. They gave us water, lemons and sugar separate and CHARGED RS.20 for this ...!!! 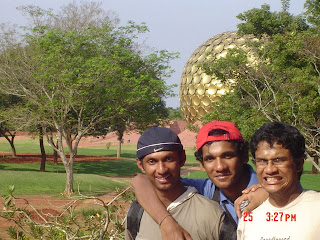 The golden globe was still under construction and we were disappointed to know that we wouldnt be allowed to enter inside coz we had to take permission from the concerned authority one day in advance ! So we roamed around the place for sometime and cycled back to Pondy. 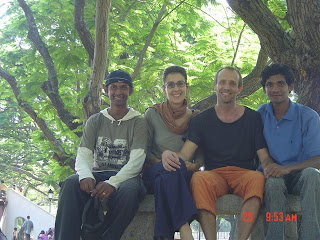 We now had lots of time to kill coz we had to board our bus in the night. So we visited some park in Pondy. We then went to Nehru street and spent the rest of the time shopping. By night we went to Pondy bus stand and reached Blore on 25th morn. 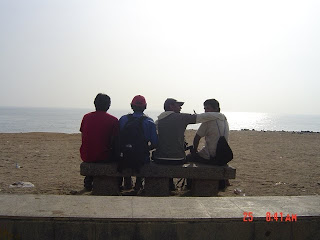 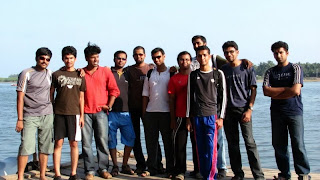 Tiju, Liddu and me left from Bangalore by bus and reached Pondy the next day morning. All of us gathered at a hotel. Once the entire gang had arrived, we checked in to a lodge to freshen up. By the time we were ready it was almost evening and we left to paradise beech. 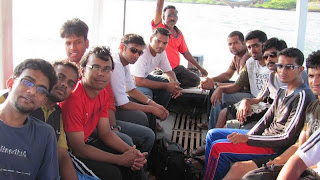 Paradise beech : Supposedly this is the best beech in Pondy and we decided to go and find out what makes this special. At the enterance we were asked to take tickets for the boat ride. You have to go by boat for about a km to reach Paradise beech. By the time we got our turn to go it was quite late and hence we couldnt spend time in paradise beech. We just went on a boat ride and returned to the mainland after viewing the beech from a distance !!
Auroville beech : Our next destination was Auroville. We knew that it was too late to go there but we had no other choice since we had nothing else to do. Without wasting any time we reached Auroville by bus and noticed that people were returning from the beech when we reached there. We just had a glimpse of the beech and we also returned from there. We barely spent 15 mins in Auroville beech :P We then returned to our lodge and dozed off. 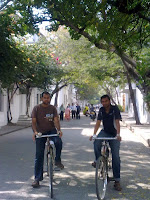 The next day we spent Manu, Liddu and me woke up early and visited a nearby church. After the mass we roamed around the french colony on cycles and returned to our lodge by lunch. Post lunch we had nothing much to do and we all dispersed in different directions. I was off to Nehru street for some shopping. We gathered at the bus stand by eve and left to Blore.﻿
Posted by tonymon's travel !! at 12:02 AM