This is one place that would never disappoint you no matter when you go there. Each time you visit this place, you get to see some new spots. I have been here twice and this blog is on my 2nd visit to this "Niagara falls of Karnataka" with my church gang ! 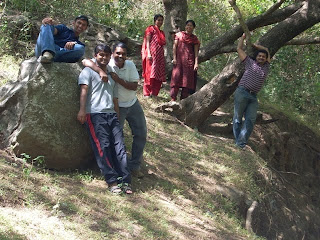 26th Jan 2009 : Our mode of transport was Santhosh's Sumo. Its always a pleasant and lively atmosphere when Jaya chechi and Reji are around. We kept cracking jokes and playing some kiddish games like Antakshari on our way to the falls. Since we started off late we reached there by 2:30 which is a bit late. Jaya chechi had a vomiting sensation coz of the travel and this was a matter of concern as this was more than a reason for our trip to flop. But thankfully she was alright in sometime and we went ahead to have lunch at some nearby hotel there. (Note : It is better to make some arrangements for food coz hotels are pathetic there). 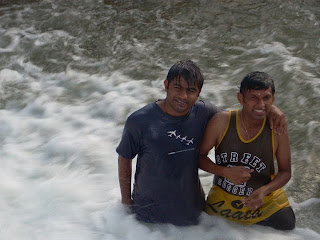 The sight of water tempted Johnson and me. We jumped into the water and had a dip. After a few seconds our heads popped out of the water and the scene that we saw drove us out :D (We saw a lady cleaning her kids backyard and this was a few cm's ahead of us :D) 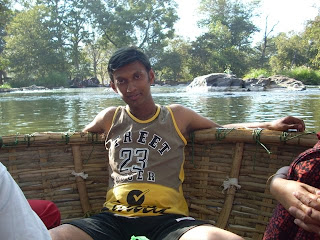 The ride in those round boats (kotta) was superb. They even rotated the boat round and round which scared the gals in r group ! 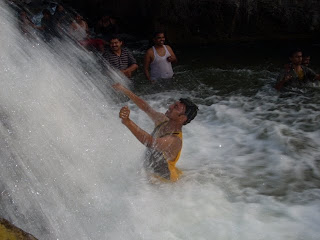 There was a spot where we could stand below the falls. The water pressure was just perfect !! 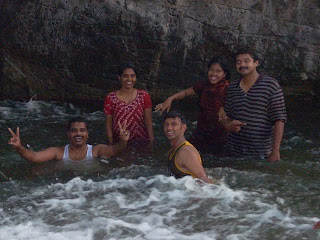 While playing in the water reji flicked some shampoo packet and started using it ..Johnson also joined him. A few moments later a tamilian gal started shouting "ange paarungoo....avangala namma shampoo eduthittirkk.." This was a but embarrassing for the 2 of them :D 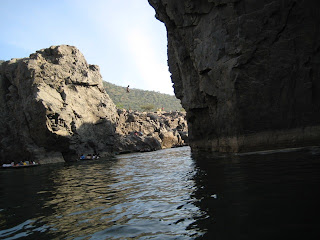 There is another spot wherein kids jump from top of the cliff and collect Rs.10 from those who witness this brave act. This stunt was also shown in the film "Raavan" (Abhishek Bachan / Vikrams dupe jumps of from a cliff at the start of the movie). Its sad to know that kids do such risky stunts for their daily bread.


Merrin had given her spectacles to Johnson to safeguard. But the it slipped out of Johnsons hands. She had been pleading to Santhoshettan for a new one since 3 yrs and hence this was considered as Gods will :D

After all the masti and fun we returned to Blore late in the night. We had dinner at Millers road and reached home by midnight. Small group small trip and good fun is what I can comment on this trip :)

I would definitely recommend Hogenakkal for a weekend trip ..!!
Posted by tonymon's travel !! at 2:37 AM