After the memorable Goa trip, Nish suggested that we go for a bike trip. Jenukallu being a place on our wish-list, we decided to plan our next trip on bikes to Jenukallu located in Sakhleshpur !! 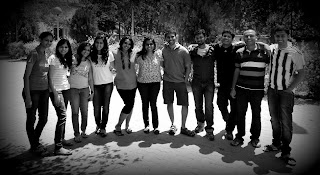 Like planned, all of gathered in Nish apartment on friday night. But due to lack of sufficient bikes and availability of cars, we decided to go by car. 3 cars and 12 of us - we started from Nish apartment on sat morning. We stopped by Kamat upachar for breakfast. By about lunch we reached Jenukallu and straight away went for lunch. The Jenukallu organizers were very receptive and served us good lunch. 2 cottages were awaiting us !!

After we freshened up, we started off with our 1st activity of the trip - Rope walk. 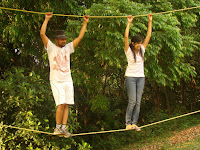 Rope walk : A long stretch of ropes tied between trees and we had to walk over them. It was a tough task for few and a cakewalk for Shyam !! Bhavya murmuring "amma amma" and Richa screaming out of fear was funny to watch :D After the 1st round of rope walk, all of us wanted to go for another round !! Once we were done with the rope walk it was time for a waterfall.

The waterfall was a 15 mins walk from the resort and it was a simple trek compared to our previous treks in sharavathi, yelagiri etc. April being a summer season, there was barely any water. But for our surprise there was an artificial spring set up by the Jenukallu organizers. There was an unexpected rain and it was fun playing dodgeball in a waterfall when its raining !! We spent time in the waterfall playing dodgeball till we were exhausted. We started our return trek to the resort and quickly freshend since we were all drenched. There was another group in the resort who were having tea along with us. We had a nice time playing dumb charades against them. It was great fun having tea sitting in a resort when its raining !!

Once it stopped raining we headed towards the hut where they had set up a camp fire. We spent time singing songs and playing games till it was time for dinner. It was great to see fog during summer !! Once we were done with dinner, we returned to our cottages since we had a trek scheduled for the next morning. 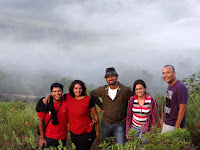 The next morning we all woke up all excited about the morning trek. Since it was summer we had to reach the view point and return to the resort by atleast 10 am to avoided the heat. It was very pleasing to walk in the mist considering that Blore was burning with heat during the summer. We reached the view point and had tea. The location was very tempting for a photoshoot and we got into our characteristic poses :D After the photoshoot we started walking back to our resort. 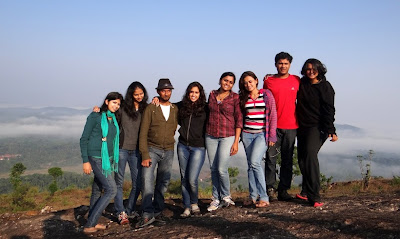 Before leaving Jenukallu we decided to play dodgeball again since not often do we get a chance to re-live our childhood days. We divided ourselves into 2 groups. The enthusiasm made it look like we were playing for a world cup  :D 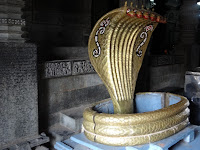 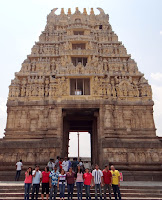 With no further delay we packed our bags and left from Jenukallu since we had planned for Belur and Halebeedu also. Belur was just 15 kms from Jenukallu and we reached there in no time. The temple in Belur was beyond words. Quite amazing to see the artistic works during historic times. Not sure if its true, but we were told that many of the missing/broken statutes were because of Tippu Sulatan !!

We went roaming around the temple and posing at different parts of the Belur temple. The sculptures reminded me of school days since these were very familiar through our history books !! After about an hour of posing and admiring, we headed towards the supposedly best restaurant in Belur and had lunch there. Visting Halebeedu seemed impractical if we had to reach Blore by midnight and since it was similar to Belur we decided to return to Bangalore. That ends another memorable trip for all of us in Trippers adda. 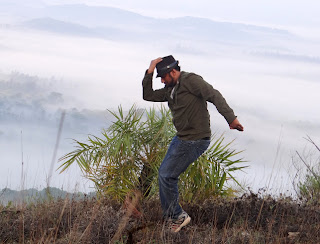 Location : Sakhleshpur
Distance from Blore : 250-300
Best time to visit :  Oct - Jan (But you could consider going here during summer since there is fog even during summer unlike many other places !!
Attraction : Beautiful cottages and the weather