While watching the movie "Ordinary", Johnson and myself decided that our next destination would be Gavi as were impressed by the shooting location !! After 2 months of planning, the day had arrived - Sep 6th !!

We left from Bangalore by Train on Thursday (6th Sep) and reached Aluva Railway station in Kerala on 7th Morning. Our TT driver (Shiju) was on time waiting for us in the railway station with his Blue Bird (a Luxurious TT) !! Since Athirapally was our 1st destination, we had to freshen up somewhere. Shiju took us to a Lodge in Perumbavoor. We freshened up quickly, had breakfast from a nearby restaurant and got into the TT. Going by our TT tradition we started off with dumb charads :D 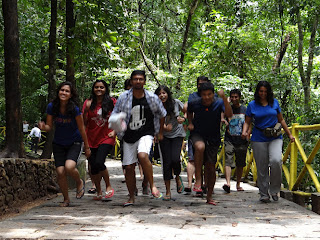 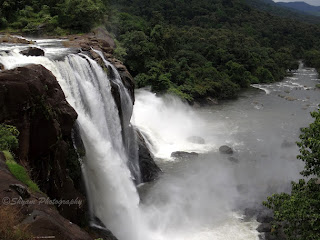 Athirapally falls : We reached Athirapally falls by about 12 PM. After taking the entry tickets, we headed towards the falls hoping to the see the scenic beauty as seen in the movie "Raavan" (Few shots of Raavan were shot here). But to our disappointment there was nothing spectacular mainly cos the water level was high and we werent allowed to get into the water at many spots. There was a small portion where tourists could get into the water. So we quickly got into the water to get started off with our Kerala expedition !! It was fun to see Jackson swimming and yet stagnant, Richa posing for pics like models, Vijay and me doing our Yoga stunts etc. After about an hour of relaxing at Athirapally falls we decided to have lunch and head towards Thekkady. Just as we started walking, it starting raining cats and dogs !! We sat in the rain for sometime as it was nice to see the monsoon in a waterfall ! Once we were done with admiring the rains and the scenic beauty, we walked towards the entrance to have lunch at a nearby hotel. 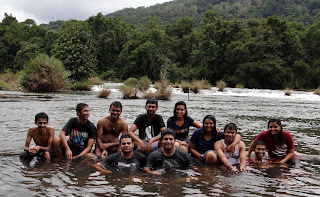 Thekkady : The journey from Athirapally to Thekkady was quite long !! We reached Thekkady by about 11 PM and had to go hunting to find dinner. Most of us had lost it coz we were too hungry. Richa had even started conversations with her tummy :D. For our rescue, there was a small hotel that was open where we had dinner. We reached our homestay at midnight. Though the homestay looked just average from outside, once we stepped inside, it was royal !! We had to sleep quickly since we had to wake up early the next day to start our journey to Gavi. 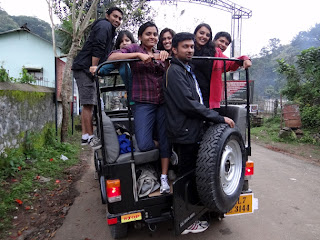 Gavi : The next day morning (8th Sep, Saturday), we woke up early and freshened up by 7 am. With no further delay we started our journey to Gavi in 2 Jeeps. The Jungle safari in Jeeps was an awesome experience. Shyam was busy clicking pics cos this place is like a photographers paradise. We were quite fortunate to see a herd of elephants, a single elephant and many other animals. After about an our of Jeep ride, we finally reached Gavi !! It was quite disheartening to know that there were just a couple of scenes in "Ordinary" that was shot here and most of it was shot in some other place. But we were glad that place looked promising though it was totally different from the movie !! After having a royal breakfast in Gavi, we started our trek. 2 guides accompanied us and we were provided with sacks to tie on our legs to avoid getting bitten by leeches. 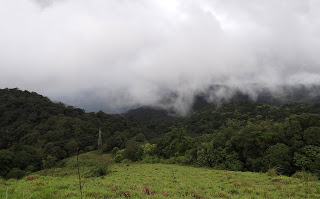 The trek was nice and relaxing. While returning, we had an option to walk along the road and to go through the forest. Richa, Jacob and Jackson took the road cos they were done with trekking. Rest of us went through the Jungle. There were few spots which made us feel that we were sitting in heaven !! The entire area was covered with Mist and we could even see the clouds moving towards us !!  After the trek we reached returned to our starting point by lunch. 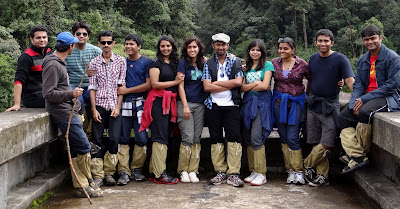 After a heavy breakfast, we went to a waterfall by boat. The boat ride was a short one. The waterfalls looked very tempting and all of them jumped into the water within no time !! Water was ice cold and it was chilling out in the water. After spending about an hour, we returned to our starting point, got into our Jeeps and returned to our Homestay. Even after reaching the homestay, none of us were tired and instead were all geared up for some fun activities !! 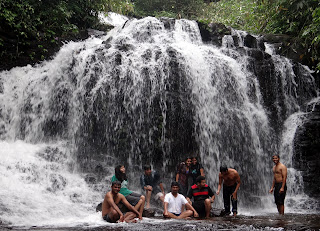 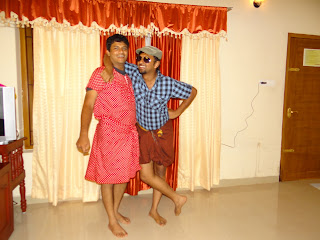 We had planned a cultural night at the homestay. All of them were given an hours time and we formed groups and prepared for events. Nish was the anchor. The gals danced for 'Mayya Mayya'. Johnson, Nish, Bhavya, Richa and Tony danced for the Kolavari song. Sandeep, Shyam and Jackson put up a fusion with Jackson as the DJ !! Vijay and Tony presented the mallu version of Oo la la from Dirty Picture !! There was a round of Hula hoopa (spinning the hoopla around your waist) in which Jackson won !! Finally there was a skit by Jacob, Johnson, Vijay, Bharath and Tony which was more like a mimicry of the Gavi trip planning :D

The next day morning (9th Sep - Sunday) all were very tired and lazy. It was heart breaking to know that the trip was coming to an end. We spent the morning looking at the videos of the cultural night and we had a good laugh :D...Since we had a train to catch in the evening, we didnt plan anything for sunday. We settled accounts with the Homestay owner (Rajesh) and headed towards Aluva railway station. We bid good bye to Shiju (TT driver) and got into the train. There ends an epic trip !!