A weekend getaway with a fun filled gang is something that most of us would love to do ! Paintball is something that  all of us wanted to but had never tried earlier. We got an info in advance that if we form a group of 10+, we could have an exclusive session for our own group and wouldnt be mixed with strangers. So we decided to go ahead with our coorg gang with few additions and subtractions !
*ing :- Abhith, Vj, Johnson, Kiran, Vidya, Ramya, Swetha, Nishchitha, Megha, Manu, Vimal, Prashanth, Ashok and me. 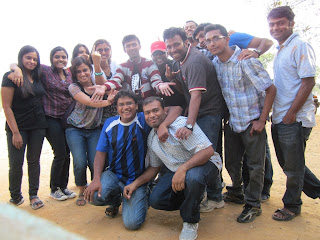 We left from Hebal by about 10am and reached Angasana resort (close to BMSIT College) by 11. Our organizer (Chetan) was ready to give us instructions but we had to hold on for sometime since Vimal, Manu and Ashok were yet to reach. As soon as they reached, we formed 2 groups (Johnson, Ramya, Vj, Vidya, Manu, Kiran, myself in one group and the rest in the other group).On receiving instructions, we were all geared up for a firing session. 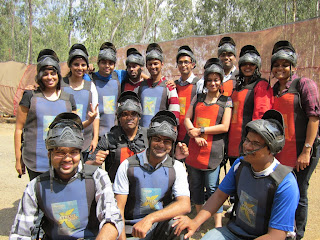 The game that we played was known as "Elimination" wherein one group had to eliminate the other by shooting each of the team members twice. For those of you who dont know what paintball is - Its a game wherein you shoot each other with pellets and these pellets bursts splashing a colour on the surface where it hits !. Both the teams had the same strategy "dodge till the other team lose waste sufficient bullets and then start firing. But since both the teams had the same strategy, nobody fired and finally the organizers had to interrupt asking us to shoot each other instead of just hiding and sitting :D. We kept running from one bunker to the other which made us feel like we were armed militants fighting for our nation ! :D.. Most of the time we would aim someone and shoot but it would be the poor trees that would receive a firing ... i pity the trees in our war field :D ... After about 45 minutes of shooting, the game came to an end and our team emerged victorious. Soon after the paintball session we had a team building activity wherein the 2 teams were made to stand in a straight line parallel to each other. The one who stood last in the 2 lines had to go to the organizer who would toss a coin and assign head/tail to the 2 team reps. They had to pass on the msg to the one in front of them with sign language (the one in front wasnt allowed to turn back and look at the one behind while communicating) and each one passed it to the other in a chain. Finally the one in the front had to shout out head or tail. Though it sounded silly, it was fun while playing this. It was best of 3. Our team won the 1st one and the other team won the 2nd won. Final one was a tie breaker which we won !!
The next event was an interesting one. The 2 teams had to form a circle holding hands. There was a ring looped in the chain and we had to pass on the ring from one person to the other without leaving our hands and the one team that took the least time in completing one full round would win. This was a thrilling one and our team emerged victorious beating the other team by 3 seconds !
The final event was another interesting one where each team had to form a train holding each others shoulders. Except the one in the end, all were blindfolded and 3 spongeballs were scattered here and there. The one in the end (who wasnt blindfolded) had to communicate with a sign language (without speaking a word). While playing this we realized how miserable life would be for the blind ! Fro a change, the other team won this team and they had a good strategy. 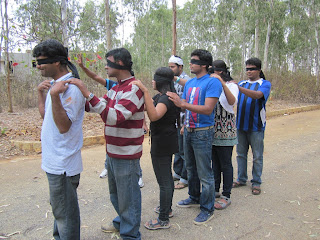 With this the paintball session came to an end and we headed towards Friends dhaba to have lunch. While having lunch we got to hear some more of the stoneman experiences from Prashant !! After lunch we had to part ways. Abhith, Vj, Nish, Swetha and Megha headed towards our college (Sir MVIT) to spend some time there and then returned home. The rest of us decided to go to Ascendis Mall in Whitefield to play Bowling. By about 8pm all the fun came to an end and we returned home after an eventful day. Thanks to all those who made it ....cheers :). Our experience with xtreme zone could be rated as 4/5 and this is for sure a recommended place for those who have plans to play paintball could try this. http://extremezoneindia.com/paintball/paintball-bangalore-angsana/pricing.html 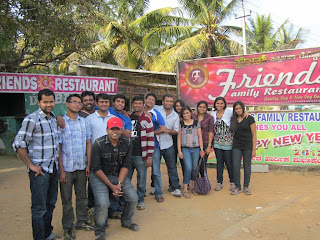