A pilgrimage visit to Velankanni was due since 15 years and we finally made it. It also came in as a road trip !! #

May 1st being a holiday we decided to spend the extended weekend with a road trip to the most Popular pilgrimage among the Christian community. We started our journey early morning and reached Krishnagiri by about 7 AM. After a heavy breakfast, we continued our journey. Apart from a heavy jam before reaching Salem, the route was traffic free. By afternoon, our next target was to stop for lunch. We finally found a hotel beside a temple. Not sure if it was the hunger or the quality of the food, the veg meals was a delight. Post lunch, we continued our journey and we reached Velankanni by about 6 PM.

Accommodation was a big disappointment since we had not done an advance booking. With great difficulty we found a place to stay - Johnson Park Inn. A rip off in terms of room tariff but we had no other option. A suggestion for those of you who plan to visit Velankanni - book your room in advance since this place is crowded beyond your imagination.

After freshening up, we visited the beach which is a tourist attraction. The beach was a disappointment since it was neither clean nor safe. We barely spent few mins at the beach and then headed towards the church. 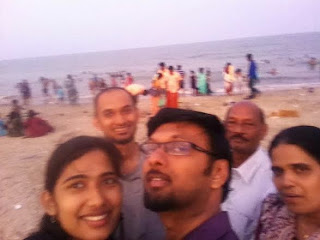 History of Velankanni church - Portugese sailors were on voyage and were struck by a heavy storm. They had taken a vow to build a church if they reach a shore safely. Miraculously the storm calmed down and they stopped by a shore which happened to be Velankanni in Nagapattinam. They then constructed a small church in remembrance of their miraculous survival. This was then followed by few more voyagers who kept contributing towards the construction of this church. 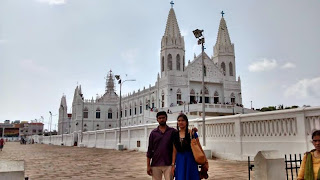 Appearance of Mother Mary with Infant Jesus - It is believed that Mother Mary and infant Jesus had appeared on a pond when a shepherd boy passed by. This pond shot to fame as 'Marys Pond' with this miracle and later became a pilgrim spot in Velankanni. A church has been built near this spot and devotees can be seen crawling on their knees on a sand laid path which is a half kilometer stretch.

Healing of a handicap boy - It is also believed that Mother Mary once appeared to a handicap who lived by selling buttermilk. Mother Mary's appearance cured the handicapped boy who went running to the village to spread a word about this miracle. A church has been constructed on this spot as well, which is yet another pilgrim spot in Velankanni.

The next day, we attended the holy mass and then started our return journey to Bangalore. We reached Bangalore by late night and had a good sleep to compensate for the 9 hour long drive.