An IT project Team is not just about a deliverable
It also creates moments that are memorable !! 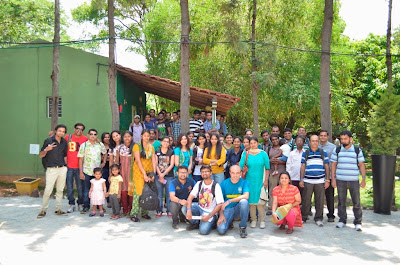 A well deserved break for wiproites from Qatar Airways account. After several attempts, the team outing finally worked out on 7th May 2015 and it was delightful to see everyone actively participating in various events organized during the team outing.

54 of us reached Mango Mist by 11 AM in 8 cars and 7 bikes. After reporting at the reception we were greeted by the resort with a welcome drink. Following which, we divided ourselves into 4 groups and the 1st activity for the day was to come up with group names. The group names were "Smashers" led by Ravi, "Brave hearts" led by Girish, "Signatures" led by Ambika and "Spartans" led by Sony. I stepped into the role of a host for the day and it was fun organizing the events. 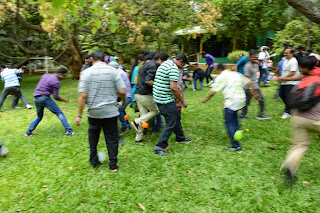 Balloon fight : This was the 1st event for the day wherein, each time were given balloons with a distinct color. Team members had to tie the balloons to their legs and when the timer started everyone had to run around bursting the balloons of their opponent teams. At the end of 4 minutes, the team which had the maximum number of balloons left would be the winners. It was fun to see everyone running around the park stamping each others balloons. After a 4 minute long struggle, Spartans emerged victorious !! 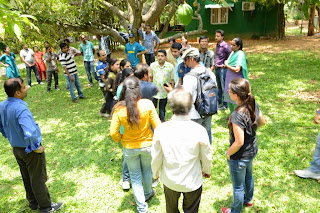 Dumb charades : After balloon fight and dodge ball, most of them looked exhausted so it was time to relax. It was time to play a game with minimum efforts and dumb charades was the best choice. The 4 teams competed with each other and "Signatures" won the Dumb charades event.

With this we were done with group events. It was now time for lunch. Food was average. Since everyone was exhausted, food appeared tastier than it actually was !! While having lunch there was a slight drizzle which we feared would be a spoilsport for the day. But we were fortunate that the drizzle stopped by the time we finished lunch !!

Shooting : Most of them rushed towards the shooting area and had their turns in firing bullets at bottles kept at a distance. Many of them managed to shoot a couple of bottles. Few of them went to the extent of spending all 4 coupons on the shooting event.

Archery : Few of them tried their luck at archery. Must say that the Mahabharath Character "Arjun" had an influence on few of them in our group.

Rope walks : There were several rope walks like Burma bridge, Quake walk etc. Many of them tried these activities and managed to complete the rope walk. This is where most of them spent time since it was a tedious task to complete few of these rope walks.

Fish spa : A fish therapy where fishes would tickle your feet for 20 minutes and eat all the dead cells !  Barring the fact that all would get to know how dirty your feet is, this surely was the biggest crowd puller. It was fun to see few of them giggling and controlling their laugh when the fishes tickled their feet !!

Zorbing : 2 of them would be made to sit in a huge ball and you would go rolling on the lawn !! While most of them were busy with rope walks, few of them went for the land zorbing. The activity sounded interesting from the experience shared by those who went for it. 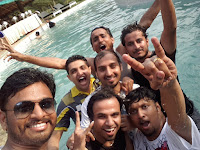 Swimming pool : The swimming pool was barely 4 feet and quite narrow. But that doesn't stop enthusiasts from jumping into it.

Mist dance : By 4 PM all of them gathered for mist dance. Many of them were disappointed that it was mist dance and not rain dance. Though nobody showed interest to dance initially, the last 10 mins of the mist dance would be remembered by all for a long time. Must say Sathish had a great amount of energy in dancing and entertaining the crowd.

By 4:45 the mist dance came to an end and it was time for Hi tea. They served us with hot tea/coffee and bajjis. This was followed by sports activities. Some played cricket while the others played badminton, fuseball and table tennis.

By 6 PM we were done for the day. With a sigh of relief and happiness, the team greeted each other and dispersed. I'm sure this outing will be remembered for a long time. Thanks to all those who made it. Special thanks to Ravi and Surendra for covering the entire event in their cameras. Also, thanks to Ayesha, Prakash, Sreedhara and Sony who helped me in organizing this outing.