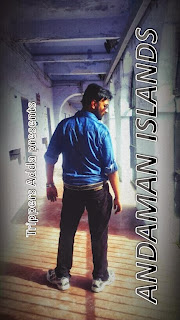 A trip that started from above the clouds and went on till below the sea covering all modes of transport !!
7 days passed by like 7 minutes leaving behind memories worth cherishing for 7 ages !!

Thanks to all Trippers adda members who were a part of this trip for making this memorable !! 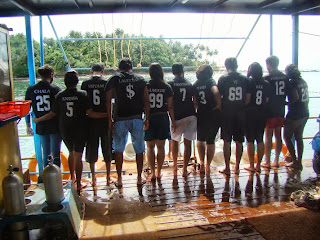 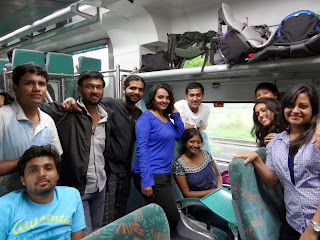 6th Sep 2013 : We started our journey to andaman by boarding the double decker train from Bangalore to Chennai since our flight to Port Blair was from chennai. (The only way to reach Port Blair is either go by flight from Chennai or by ship from Cochin).The train journey was fun cos we played dumb charades and troubled our co-passengers since dumb charades is not a silent game as the name indicates :D We reached chennai airport and had to wait till 5 am to board our flight to Port Blair !!

We reached Port Blair on 7th Sep at 7 am and were greated by Kirans parents. We got into our cars that were arranged for our 1 week stay in Andaman islands and reached the guest house. After freshening up, we were all set to explore Port Blair. 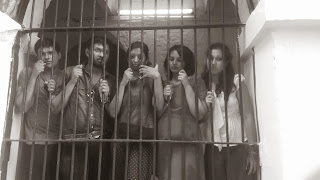 Port Blair (7th Sep) : The main tourist spots in Port Blair are Cellular Jail, Chatham Saw mill, Sports complex and the museum. Cellular Jail reminded us of the movie Kalapani which was shot there. We started off with the museum where we got to see an overview of what was in store for us the next 1 week. Chatham saw mill was another spot for a photo shoot with nothing much to entertain. The cellular jail was the highlight of our day 1 in Andaman. After a long photoshoot, we headed towards the Sports complex where Shyam, Jacob and Johnson tried Jet skiing. With this the 1st day came to an end. We had to catch some sleep cos the next morning we had to goto Havelock by ship. 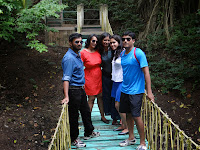 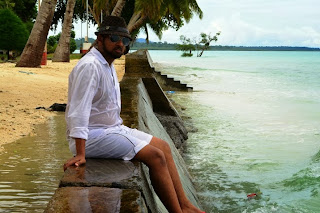 Havelock (8th Sep) : We got up early in the morning, freshened up, had breakfast and rushed to the shipyard. The ship cruise to Havelock was a bit boring cos we had nothing to do in the ship other than walking around sipping a cup of tea. Thankfully it rained only when we were in the ship. Once we reached Havelock, we freshened up in our rooms which was arranged along the beachside. We then headed towards Radhanagar beach which was a visual treat !! Exactly like we had seen in movies and I finally got to see the sea blue color :D We played throwball, chain game etc and even buried shyam in the sand :D 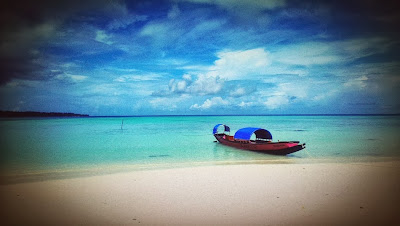 When we returned to our rooms, we noticed a strange phenomenon. The beach near our rooms had dried completely. We then got to know that due to high tide-low tide, the water vanishes every 6 hrs !! With this our 2nd day in Andaman came to an end.


Elephant beach and Scuba (9th Sep) : We checked out of our rooms and split into 2 groups. The 1st group went for Scuba diving which was a dream come true for the 1st timers. Scuba costed 4000 per head. The rest of them visited Elephant beach and did snorkeling. Though the beach was too small, it looked beautiful. The cost per head was Rs.500 which is inclusive of boat ride till elephant beach and snorkeling !! Post lunch all of us gathered at Havelock, got into the ship and returned to Port Blair. 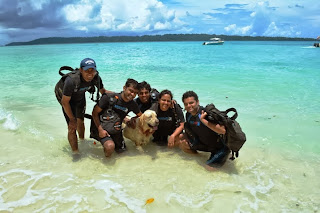 Ross Island and Carbon Cove beach (10th Sep) : Ross Island is a place meant for photography cos it contains nothing but ruins. We went by boat from Port Blair to Ross Island and had about 3 hours time to roam around the little island. There were ruins of a church, community centre, market etc. The museum had pics of how Ross island looked earlier and how it is now which gave a nostalgic feel. There were deers and rabbits running around the island. By afternoon we returned to the boat and reached Port blair late afternoon. We then visited Carbon cove beach in Port Blair. After visiting the sea blue beaches, it wasn't fascinating to visit a beach which looked like the normal beaches :D After a few photographs, we returned to our guest houses and proceeded with the cultural night. 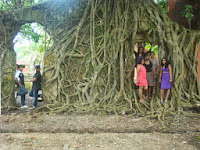 The entire group was split into groups of 4 and each group had to perform a mad ad and skit. It was an entertaining event where all of us felt like we were back to college days :D Johnson's birthday party was also celebrated at the stroke of 12 which took him by surprise since it was unexpected !! ... We then dispersed to sleep cos we had a hectic day ahead. 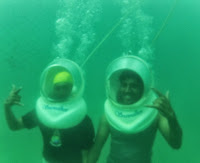 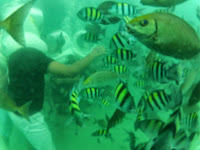 North Bay and Mount Harriet (11th Sep) : The much awaited moment for those who didn't try scuba was here.. sea walk in north bay !! However, this didn't live up its hype :P .. We headed towards north bay by boat from Port Blair and got into a ship. We could see the sea walk helmets lined up awaiting us !! We got into the water by climbing down a ladder from the ship. Just as the water reached our neck, they would drop the helmet on our head and we would go down till the sea bed (The helmet supplied oxygen and water wouldn't enter inside).... Very soon we could walk past corals and fishes were roaming around our heads. It looked more like we were in a fish bowl and fishes were moving around us freely :D After about 20 mins of underwater experience, we reached the ship deck, changed our clothes, got into the boat and returned to Port Blair. Our cars were all set to take us to Mount Harriet. 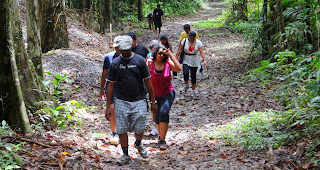 Though the name sounded classy, the destination was disappointing but the trekking path was amazing !! We had to reach a spot called kala pathar and there was nothing interesting about this kala pathar. We were given 3 options. A short trek to kala pathar, a long trek to some view point and a medium trek to a lighthouse. We had to opt for the short trek considering the possibility of a rain. The path to kala pathar was filled with leeches. You halt to take off a leech and you're attacked by 10 other leeches !! So we kept trekking least bothered about the leeches. Once we returned to our starting point, 13 of us cleansed ourselves from the leeches and the whole place was a pond of blood !! We then had lunch at Mount Harriet. While returning back, Vj, Nish, Chala and Sneha decided to trek to the lighthouse too. Unfortunately they were misguided and failed to reach the lighthouse. While heading back home, we saw the Tsunami ruins. A stretch of land that has become a waste land after the disastrous incident !! 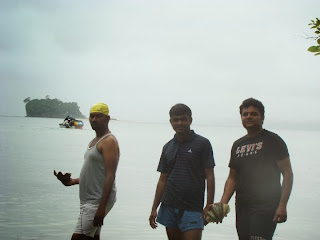 Red Skin beach and Chidia Tapu (12th Sep) :  Jolly boy is supposedly a must visit beach in Andaman. But strangely, this is closed for every 6 months to visitors. This is substituted by Red skin beach and so we were taken to Red skin by boat. Snorkelling was a part of the package in Red skin beach. After a brainwashing session by the Snorkelling guides, many of us decided to go for the paid snorkeling which sounded more interesting than the one that was part of our package. It was definately worth !! Corals, Sea anemones, sea cucumbers, fishes, oysters - We were all lost in the aqua world !! Once we were done with the snorkeling, we freshened up and returned to our boat. 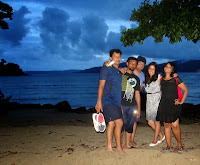 The next desitination for the day was Chidia Tapu which is a sunset point. We reached in time and saw the sunset. Photoshoot was all we could do here since none of us were interested in getting into the water again. We also visited a park in chidia Tapu which had crocodiles !! Park looked beautiful and was apt for a walk. 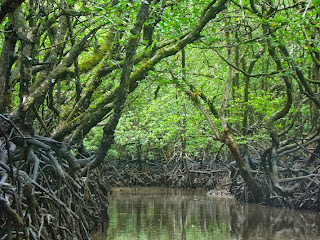 Baratong (13th Sep) : This was our last day in Andaman islands. Baratong was planned for the day and this place is popular for the limestone caves. To reach here, we had to go through the forest where Jarava tribes reside. We could spot just one tribal guy on the way. After crossing the forest, a ferry took us to a boat jetty where a speed boat was awaiting us. The speed boat took us through Mangrove forests to the start point of our trek to the limestone caves. Unfortunately we couldn't spot any crocodiles in the mangrove forests ! 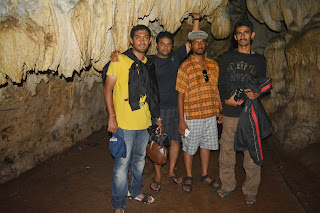 After walking through a field and forest, we finally reached the limestone cave where we saw various formations and sinkholes which were familiar in geography text books back in school days :D. There was a slight drizzle during our return trek. Without getting drenched much, we managed to return to our speed boat and then headed back towards Port Blair to pack our bags. 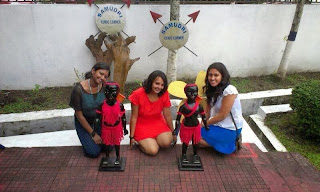 Tribes in Andaman : The Jarava tribes were against islanders during historic times.They had then started building friendly relations after the islanders rescued a kid from the Jarava tribe !! Tourists were even allowed to meet the tribes. Sadly few yrs ago, tourists forced them to dance naked and uploaded the video. This became a controversy and tourists were banned from meeting the tribes. Things have settled now and currently tourists are allowed to travel through the jungle but with escorts !! Very unfortunate that some uncultured tourists do not have any value for humanity.

14th Sep 2013 - This marked the end of our Andaman episode. We left to the airport early morning after settling all the accounts and gifting the organizers as a token of gratitude for the wonderful arrangements that they had done to make our stay in Andaman very memorable and cherishable !! Like Nish said, "The Utopia of an imaginary land came to life here at Andaman, Thank you Kiran and Megha for making this happen" 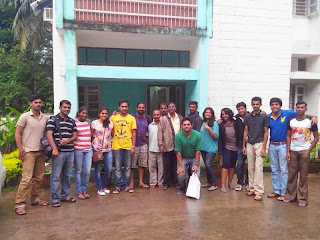