An extended weekend indicated there would be a trip coming up and the venue was finalized during the last minute ! Chikmagalur was our destination. We were waiting for the world cup finals to get over and once India lifted the world cup we packed our bags and left for our overnight drive to chikmagalur in Jacobs car ! 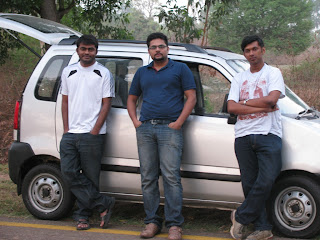 The whole night we kept driving and by about 6am we reached Chikmagalur. I had contacted a homestay called "Joes homestay" before we started our journey so we didnt have much trouble finding accommodation. By about 8am we reached the homestay which was a place equidistant to all the major spots in chikmagalur. The homestay was much above our expectation. We got a 3 BHK for just Rs.3000 ! 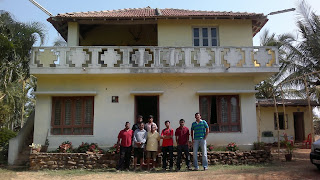 After a brief discussion with the localites there we charted our plan.

Kalahatti falls : We started our sightseeing in a very disappointing way. The build up for Kalahatti falls had created a majestic image in our minds. But to our disappointment Kalahatti falls was below average and we didnt even bother getting into the water.The entire area was filled with localites and it didnt look like a tourist spot at all ! So we decided to move on to the next spot. 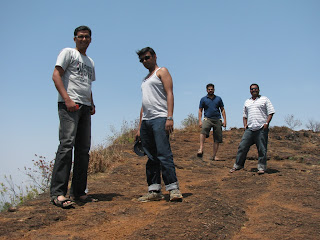 Kemmengundi : Since we had been there at the wrong time of the year, Kemmengundi didnt appear mindblowing. We had been to n number of hilltops earlier so this was nothing great for us. But we werent as disappointed as the previous spot. Probably the hot sun spoilt the show ! The next spot was a big confusion. "Z Path" was very close to Kemmengundi but it would have been a hectic task treking in the hot sun so Johnson took the right decision and we headed towards Hebbe falls. 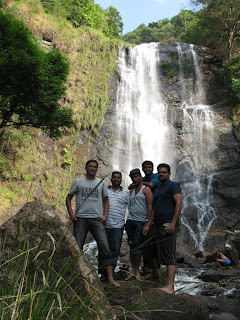 Hebbe falls : This was the saving grace. The route to Hebbe falls is not meant for cars and so we hired a jeep. The ride to Hebbe falls was scary coz there was no road. We were rolling down a hill which reminded us of a mallu film called Bramharam ! I was a bit too tired and hence fell asleep. Later on I heard from my friends that the ride was horrifying :D.. We reached the parking area by about 3pm. We then started our trek to Hebbe falls. We had to walk across 3 streams to reach this falls. The water was ice cold and the stream walk was a great experience. After about half an hour of treking we reached the falls. The falls was much above our expectation coz we had made an underestimation considering the hot climatic conditions ! Since I had a bad throad and cough, I stayed away from the water. Rest of them jumped into the water and played like in childhood days. I had a good time clicking pics to register some memorable moments of our trip. We spent about 2 hours in Hebbe falls and then left to our homestay. There was a clash between us and the jeep driver (Lobo) which Reji handled smartly. We had agreed on Rs.1300 but Lobo dropped us midway in the forest and asked us to walk back. We decided not to pay him if he doesnt drop us from where he picked us and this went into a big arguement. Finally we paid him Rs.800 and left from there ! 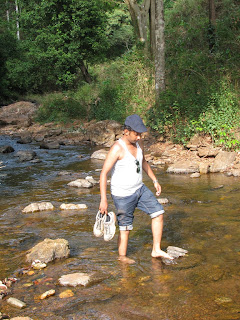 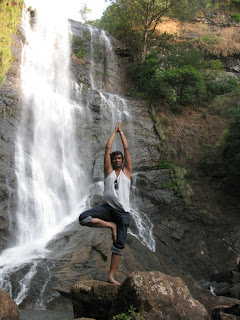 Since it was too late for "Z Path" we had to chose between "z path" and "Mulliyangiri" for the next day. Considering the geographical importance and fame we chose Mulliyangiri. We had a good sleep and felt like we were at home. The food was also good. I would recommend Joes homestay (9449414130, 9663407497, 9343604888) for all those who are planning a trip to Chikmagalur. We checked out from the homestay by about 9 am the next day and headed towards Mulliyangiri 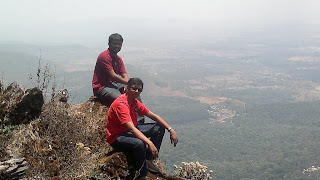 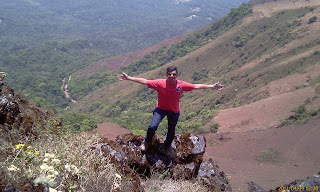 Mulliyanagiri : This is the highest peak in Karnataka. The drive to this spot is a bit risky considering the narrow roads and absence of any handrails to avoid falling of the road !! Wonder how people drive on this road when there is mist !! We stopped at one of the view points on the way. While posing for pics we heard a waterfall sound and found a treking path. Johnson and myself decided to get a bit adventurous and started treking to find the waterfall. We kept treking and at one point realized that we were treking in the opp direction coz the waterfall sound was fading. Since we had to reach Blore by night we dropped the plan and returned to the viewpoint were the rest of our gang were waiting for us.We reached the parking lot by about 11:30 am. We started climbing the steps to reach the highest spot in Karnataka. On the way we found some small cliff where we posed for many pics. Reji had stayed back in the car coz he was exhausted. Jacob and Alex withdrew from the mission after clicking some pics at the cliff. Johnson and myself continued our journey and reached the top in no time. We took some pics there and started walking back towards the parking lot. 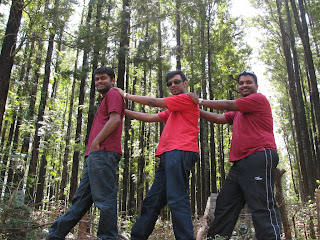 We started our return journey hoping for a good restaurant to fill our empty stomach !! We had lunch at some place after Hassan. We finally reached blore by about 7pm and labelled this trip as "Crazy 5 on a crazy day ! " :D .. This wouldnt be the best among our trips but definately a trip worth remembering..cheers to all who made this memorable and entertaining :) Thanks to Jacob for sacrificing his car for this trip (I ges the car would need some servicing :D ) 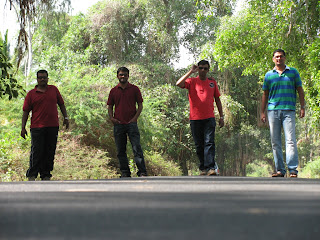