With a bunch of good friends to hang out with,
Destination is just name sake
And once you have your destination fixed,
Memories for sure you would make
Doesnt matter where you go
Be it a mountain, island, waterfall or a lake
Hulikallu, here we come half a dozen guys
This sure is a much needed break !!

Hulikallu : Like Jenukallu, Rotikallu and Ghatikallu, this is yet another beauty nested in Sakleshpur. Huli stands for tiger and Kallu means Stone. For your info, Tiger is the name of a well trained dog in this resort !! 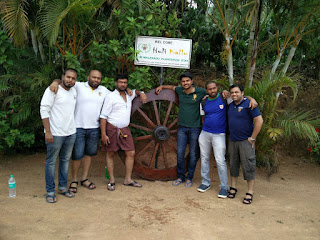 7th April 2016 : 6 of us were all set to spend the long weekend in Hulikallu (situated in Sakleshpur, approx 250 kms from Bengaluru). Our journey started at 6 AM from Bengaluru since we had to reach Hulikallu by 11 AM. After a couple of pitstops we stopped by Ossoor restaurant for breakfast. 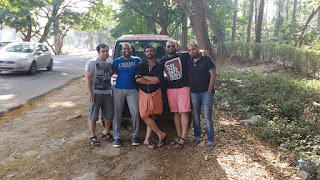 Next in line was a quick nap and then gully cricket following which the resort guys took us to the sunset point. A walk in the nature within the resort premises to view the sunset sounded interesting but unfortunately we reached after the sun had set :P 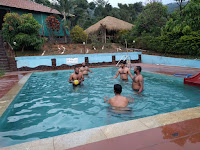 After returning from the sunset walk, we played water polo in the swimming pool and then had snacks offered by the resort. Camp fire was set up by late evening and we had dinner. We had to sleep early since we had to wake up early the next morning for a trek. 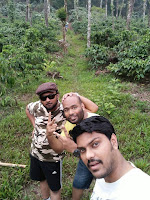 The trek started early in the morning. Though it sounded a bit stressful, we were quite comfortable walking up the hill through some green pastures and forests. 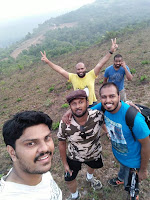 After about 2 hours of trek, we finally reached the spot where we were set free to relax in the natures lap. 'Tiger' acted as a perfect guide and turned out to be a better poser for pics. Far from the madding crowd, amidst the natures art, we spent some quality time relaxing wondering if all these would remain the same years down the lane. Strange but true that the current traffic obsessed Bengaluru was as beautiful as any of these spots once upon a time. Hope these remote scenic spots do not fall under the cruel eyes of industrialization. 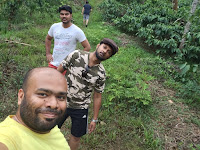 After an hours break we started our return trek to the base camp. All of us were thrilled to head towards the adventurous activities which were part of the package. We started off with the rope walk and then tried the tarzon slide.
By 11 we were back to our rooms and it was time for us to bid adieu. Tiger being a super smart resort resource, turned sides when a new group checked in. We were quite amazed at how a dog could be trained to this extent. The guide also mentioned that Tiger was smart enough to guide a group on its own. 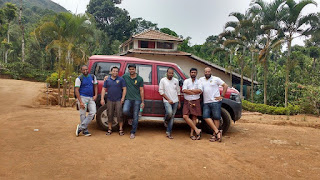 After packing our bags, we started our return journey. By late evening we reached Bengaluru, watched a movie in Sangeeth theater and reached home by mid night.