Though I had registered my name with the Bangalore Acenders group a year ago, I had never been for a trek with them. This time when I saw a post about a cycle trip to Gouribidanur, I nominated my name with no second thoughts. I had never met any of them earlier but I decided to join them for a cycling experience and I must say that I do not regret going with them .. A very well organized and down to earth group. The team was led by Rajesh !!

22nd June 2013: As per the plan we started our journey early morning by 7 am. Most of them started from Cubbon Park and few off us joined mid way on airport road.

We had breakfast at some hotel near Puttanahalli Bus depot and then continued cycling towards MVIT cross. Though there was a direct road, the organizers chose this route since it was perfect for cycling.  We had a pit stop somewhere near MVIT cross and this is where we started out photography :D !! Quite fortunate to have Anil K Mohanty as our photographer !! 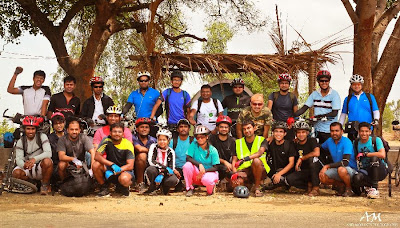 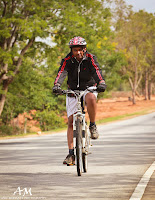 In spite of the rain, we kept cycling. In between I skid and fell from my cycle and then realized that my chain got screwed. Somehow managed to fix it and then continued my journey ! Anil then clicked some amazing clicks during few pit stops. Must appreciate his photographic skills !!
After about an hour we reached Thondebhavi which is about 10 kms before our destination. We had snacks at Thondebhavi and then got back to our cycles !! By late evening we reached Naveen's farmhouse where we planned our night stay. 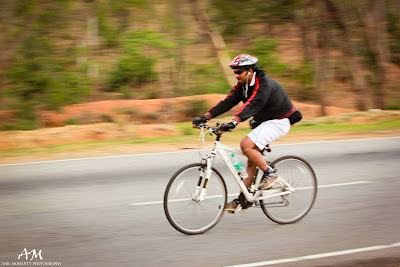 The farmhouse had very basic amenities and it was nice to see a bunch of 25 cyclists adjusting with the available facilities. It was a very new experience to prepare dinner and have it sitting in a cow shed !! They had arranged for jackfruits too !! There was a camp fire after which all of us slept. Few of us slept in the farmhouse and the rest who had their sleeping bags slept in the cowshed !! 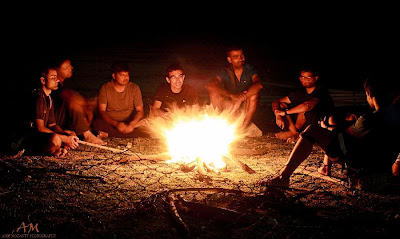 The next morning (23rd June) we all freshened up and started cycling by about 8 am !. We had breakfast at Thondebhavi and headed towards Bangalore. By now my back was hurting a lot cos my cycle had a very uncomfortable seat. The return journey wasnt easy since there were steep uphills. I eventually pushed my cycle for about 5 kms :D By the time I was nearing Dodbellapur I realized that its not practical for me to reach blore by evening since I had planned to watch Ghanchakkar with my friends !! It then flashed my mind that my brother was just a phone call away. Titus came to the rescue with his bike till Dodbellapur. By then I had completed about 115 kms of cycling and 5 kms of walking :D. We had some amazing mushroom biriyani at a hotel in Dodbellapur near Angsana resort and then I returned home on Titto's bike. Titto completed the remaining 25 kms of cycling along with the Bangalore Ascenders group ! 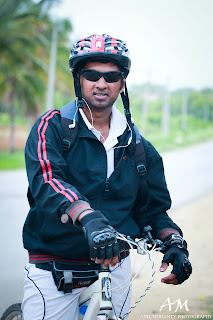 Must say that I am happy to be part of this monsoon cycling trip. Met few amazing people, cycled through all kinds of climatic conditions, stayed in a farmhouse and had good food also !!  What took me for a surprise was that all these accounted to just Rs.400/- !! Hats off to Rajesh and group for having organized this. Also Naveen who was generous in accommodating us in his farm house which sure was a very unique experience for city dwellers !!